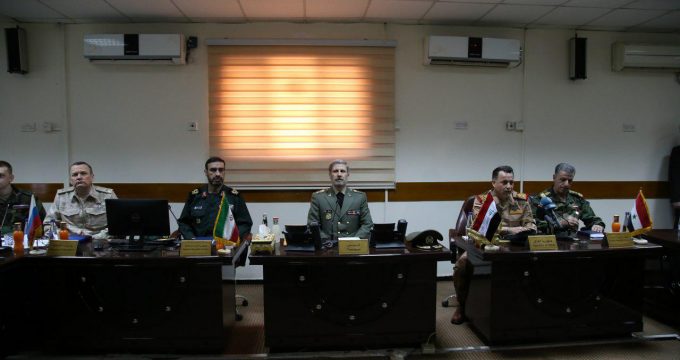 IRNA – Today, the so-called peace advocates have turned to be the most criminal governments committing crimes against innocent, defenseless people in Iraq, Syria and Yemen, said Iran’s Minister of Defense in the Iraqi capital on Thursday.

Brigadier General Amir Hatami made the remarks in the quadrilateral committee meeting of Iran, Russia, Iraq and Syria in Baghdad.

He said that coalition of Iran, Iraq, Russia and Syria, which was formed upon intensions of leaders of the four countries, had an effective and key role in defeating Daesh (ISIS) Takfiri terrorists.

Understanding threats as well as the common interests enjoyed by the four nations and joint intelligence cooperation among them, helped these countries to achieve their goals and successfully accomplish antiterrorism missions, the Iranian defense minister said.

The experience obtained by the four countries in defeating Daesh and restoring stability and security to the region should be used as a basis for future cooperation.

Head of Iraqi Military Intelligence delegation Major General Saad al-A’laq inaugurated the meeting by welcoming the participants and presenting a report on the activities of the quadrilateral intelligence exchange center during the fight against terrorists, especially Daesh.

Representatives from Russia, Iraq and Syria also presented reports on their intelligence activities and anti-terrorism measures.

General Hatami arrived in Baghdad on Wednesday for a two-day visit.