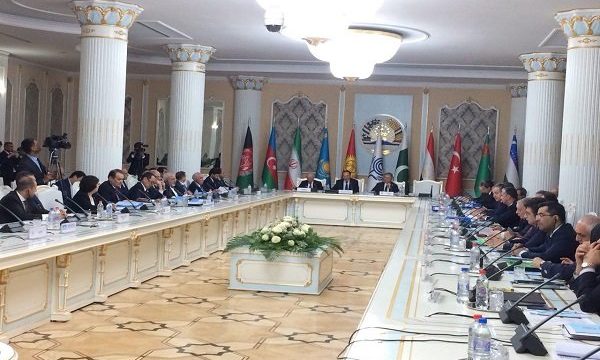 April 18, The Iran Project – Accompanied by a political entourage, Iranian Foreign Minister arrived in Tajik capital of Dushanbe on Monday (April 16) to take part in the 23rd Meeting of the ECO Council of Foreign Ministers (COM) and meet senior global officials.

Zarif also met with the Iranians living in Tajikistan including the staff of Iranian embassy in Dushanbe and their families.

Addressing the 23rd Meeting of Council of Ministers, Zarif said foreign intervention, terrorism and extremism have destroyed a large part of ECO region.

He said Iran firmly believes in the benefits arising from regional cooperation and interaction and has always manifested its full commitment to the objectives of the Organization and acceded to all initiatives, programs and agreements within the Organization.

In a meantime, Zarif and Mukhridinovich Aslov conferred on bilateral ties, implementation of agreements reached during the visit of Tajikistan’s president to Tehran, as well as regional issues.

Zarif in a meeting with his Turkmen counterpart touched upon expansion of bilateral ties and called for implementation of agreements reached previously between the two sides.

They also discussed the current developments in the region, as well as the topics discussed during ECO meeting.

Speaking among Iranians living in Tajikistan, Zarif referred to cultural similarities between Iran and Tajikistan, saying that the bilateral relations between the two are of great sensitivity.

Hoping that the two countries’ economic cooperation increases, Zarif said “if we want to support Iranian domestic products, neighboring countries are the most important markets.”

Talking to reporters at the end of his two-day visit to Dushanbe, Zarif said: ”During this round of the meetings in Dushanbe, we assessed the goals and objectives defined in the “2025 ECO Prospects” which was formerly adopted in the Islamabad meeting of ECO, the adoption of the New ECO Program on Assistance to Afghanistan, as well as the administrative and financial issues of the Organization.”

Eventually, Zarif ended his visits in Dushanbe on Wednesday and embarked on a six-day visit to American city of New York to attend a High-Level Meeting on Peacebuilding and Sustaining Peace on 24 and 25 April 2018.