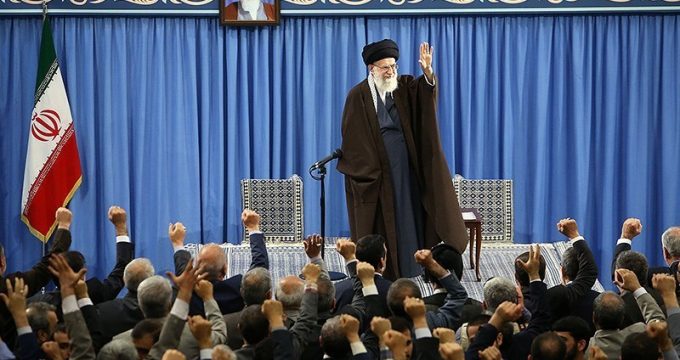 Ministry of Intelligence’s duties include combat against economic corruption

ISNA – The minister, managers and officials of the Ministry of Intelligence met with the Leader of the Islamic Revolution Ayatollah Khamenei on Wednesday morning April 18, 2018.

During the meeting, Ayatollah Khamenei mentioned that the ministry stemmed from the Islamic revolution and the youth trained by Imam [Khomeini].

At the beginning of his speech, the Leader of the Islamic Revolution referred to the commencement of the month of Sha’ban, he called this month a great opportunity, like Rajab and Ramadan, for extending relations with God, developing fondness for the Quran, reciting the rich prayers, and also an opportunity to increase ones’ insight.

Insisting on the necessity of a revolutionary movement within the Ministry of Intelligence and keeping its revolutionary aspect intact, and referring to the various dimensions of an “intelligence war” on the side of a vast front of enemies against the Islamic system, Ayatollah Khamenei stated, “One of the main axes of this war represents influence of the officials’ calculation system and changing public opinion; thus, in this war, besides defending and blocking openings of intrusion, offensive measures must be carried out; and any negligence and oversimplification must be seriously avoided.”

Then, referring to the formation of the Ministry of Intelligence subsequent to the Islamic Revolution, he added, “The Intelligence consortium was formed pure and healthy, from the beginning; and, up to now, it has stayed the same and has proved its work by successfully overcoming difficult challenges.”

He regarded the Ministry of Intelligence to be in compliance with the defined policies and said, “In all parts of the world, intelligence systems follow policies of the country’s governing body.”

Emphasizing on the fact that the framework of the policies in the Islamic Revolution system are determined by Imam [Khomeini] (R.A), the framework being based on his will and remarks, Ayatollah Khamenei reminded the audience, “In this framework, leadership is also part of the system, not the system in itself.”

Continuing his speech, he referred to the largely complicated war, led by the opposing front, agaisnt the Islamic Revolution, going on to say, “We are now placed in the middle of this great, big battlefield; one side of it being the System of the Islamic Revolution; the other side is the huge, powerful front of the enemies.”

Ayatollah Khamenei regarded the intelligence services of the opposing front as the main factors of this confrontation, and stated, “The intelligence systems of the opposition, despite all their efforts, haven’t been able, so far, to accomplish one significant thing. However, if we act negligently in this war, we will be defeated; and, if we oversimplify the confrontation, we will receive a damaging blow.”

Furthermore, referring to dimensions of the complicated “intelligence war,” Ayatollah Khamenei stated, “With this war, there are various methods in play, including penetration of and robbing information, changing the calculations of decision makers, changing public opinion, to causing economic and financial chaos, and security unrest.”

The Leader of the Revolution insisted, “We have to resist during this war, against the plans of the adverse front; to overcome the enemy, we have to develop offensive strategies besides defensive ones, so that a strategical blue print on playing field is laid out by our intelligence services.”

Ayatollah Khamenei counted longterm planning with the prediction of future events, precise analysis and study of intelligent operations among the means to counter the adverse front’s plans against the intelligence establishment of the country.

He also spoke on the subject of combatting corruption and said, “Fighting corruption has to be taken very seriously; its main arteries have to be targeted because corruption leads to moral disruption and defeat of the population and the society.”

The Leader of the Revolution mentioned the ‘spirit of always wanting more’, privilege-seeking, and luxurious types of living, as the root cause of corruption, in many cases, and remarked, “It was for this reason that the great Imam [Khomeini] insisted on having a simple and ordinary lifestyle, and recommended maintaining the lifestyle of a religious student for the officials.”

He stressed that, “In the Islamic Republic we are seeking the government of the Prophet (PBUH) and Amir Al Muminin (AS) in the name of Islam. That is why we need to oppose, firmly, against the spirit of luxurious lifestyles and pleasure-seeking behavior.”

Ayatollah Khamenei finished his speech by telling the employees of the ministry of intelligence, “Deliver my greetings to everybody in the ministry, all over the country, and to your families; know that an important part of the reward for your work and effort goes to your spouses: your achievement and effort is a result of their cooperation and patience during difficulties.”