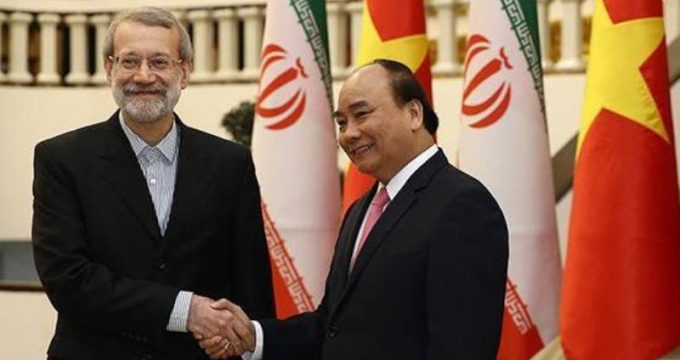 IRNA – Tehran and Hanoi should make progress in economic cooperation as they have already done in political ties for 45 years, Iran’s Majlis (Parliament) speaker said on Tuesday.

Iran and Vietnam should make use of the experiences gained from bilateral relations since 1973, Ali Larijani said in a meeting held in Hanoi with the Vietnamese Prime Minister Nguyen Xuan Phúc.

In the meeting, Larijani called for further bilateral cooperation in the areas of agriculture, electricity and telecommunications.

Then, he stressed the importance of removing the banking hindrances to the way of economic cooperation.

About bilateral cooperation, Larijani said Iran is to attract foreign investment in Makran coastal area in which Vietnam can also participate.

For his part, the Vietnamese premier said his country respects the traditional and long-lasting ties with Iran.

Turning to his 2014 visit to Iran, Xuan Phúc called for implementation of mutual agreements in order to boost the current level of trade exchange.

He also underlined the importance of removal of banking obstacles.

Vietnam, as he said, is willing to expand energy, telecommunications, tourism, electricity and transportation relations with Iran.

Iran’s Larijani arrived in the Vietnamese capital early on Monday.

After Vietnam, Larijani is to visit Sri Lanka.