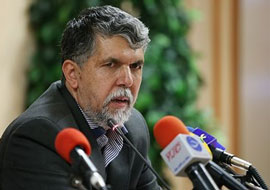 IRNA – Iranian minister of culture welcomed here the expansion of cultural relations with the neighboring country of Iraq.

In line with good bilateral ties, Iran and Iraq should broaden their cultural relations, Abbas Salehi said in a meeting held in Baghdad with a group of Iraqi elites and intellectuals.

At the meeting in which Iraqi Minister of Culture Faryad Ravandozi was also present, Salehi expressed hope that Tehran and Baghdad would witness bright cultural future.

Meanwhile, the Iraqi intellectuals expressed their views about the importance of expansion of cultural ties between the two nations.

Iranian minister of culture and Islamic guidance arrived in the Iraqi capital on Monday afternoon for a four-day visit to the neighboring country.