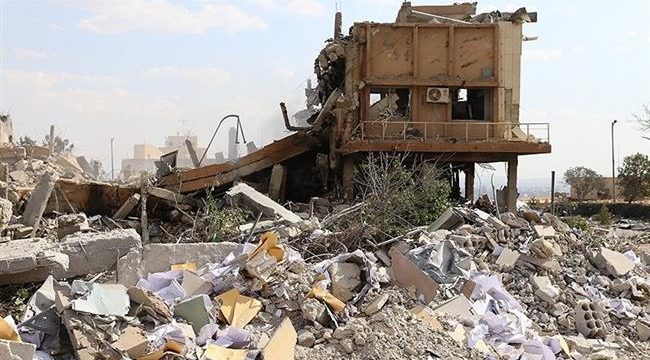 US-led Syria strikes: West trashes international law in favor of ‘might is right’

RT | Robert Bridge: Once again, Western nations have ganged up on a sovereign state, first accusing it of crimes without evidence before following up with a brazen attack. The reason for such behavior is diabolically simple: because they can.

On Saturday morning, the world awoke to the news that the US, the UK and France had followed through on their threat to punish President Bashar Assad for his alleged use of chemical weapons against innocent people. These NATO states unleashed a massive missile strike near Homs and the capital Damascus with the stated purpose of destroying sites said to be connected to the production of chemical weapons. If the attack was intended for domestic consumption only, in typical ‘wag the dog’ fashion, it failed miserably on that score.

Russian President Vladimir Putin slammed the military assault, saying it had not been sanctioned by the UN Security Council, and was carried out “in violation of the UN Charter and principles of international law.”

That was just the beginning of the serious legal issues regarding this brazen, cowardly attack on a sovereign nation. Not only did the Americans, British and French flaunt international law, exactly as they had done seven years ago in Libya, they arrogantly ignored the democratic will of their respective constituents, bypassing congressional and parliamentary procedure in a mad rush to war. In fact, the only thing ‘transparent’ and ‘accountable’ about Saturday’s attack was the flimsy foundation upon which it was advertised.

UK Prime Minister Theresa May, invoking the very same invalid argument that she used to accuse Russia in the Skripal poisoning mystery, said it was “highly likely” Syrian President Bashar Assad was behind the ‘chemical attack’.

Echoing that subjective, fact-free assertion, the White House said it had a “high level of confidence” the Assad ‘regime’ was responsible for the alleged attack.

Not to be left behind by his peers, Emmanuel Macron, displaying early warning signs of Napoleon complex, told reporters that he had “proof” Assad was responsible for the attack. Yet the French makeup artist has yet to produce a shred of evidence to support his claim, and, we can safely assume, never will.

This brings us to the really disturbing part about Saturday’s attack: had Team Trump shown some restraint for just a few more days, they would have been able to make a much more accurate and measured assessment as to what really happened in the Damascus suburb one week ago. That’s because a team of experts from the Organization for the Prohibition of Chemical Weapons (OPCW), was scheduled to arrive in Syria on April 14 – the very same day the NATO members launched their assault – to carry out an investigation of the alleged chemical attack.

In other words, Trump, May and Macron could actually be charged with ‘tampering’ with a crime scene and destroying the evidence before investigators can carry out their forensic work.

“It’s most probably an attempt to create difficulties for the OPCW mission that is just starting its work… or even to thwart it,” the chair of Russia’s Foreign Affairs Committee of the Federation Council, Konstantin Kosachev, said.

This rush to war brings to mind the US-led invasion of Iraq in 2003. With UN weapon inspectors on the ground in the country, reporting no trace of weapons of mass destruction, then Secretary of State Colin Powell saved the day by giving a performance worthy of an Academy Award at the UN General Assembly. As attendees stared on in wide-eyed disbelief, Powell shook a vial of ‘anthrax,’ inviting his audience to imagine what would happen if Saddam Hussein decided to unleash the deadly bacteria against their people. Only after the disastrous Iraq War was well underway did the Western mainstream media think to question the ‘bad intelligence’ and blatant deception that permitted the US and its allies to undertake the cruelest, most opportunistic attack on innocent people in recent memory.

The very same could be said about the disastrous NATO-backed regime change in Libya in 2011. In both cases, relatively stable and prosperous countries were turned into hotbeds of terrorism, violence and crime. In fact, the world would most likely never have heard of the terrorist organization ‘Islamic State’ had the West stayed out of Iraq. And here is the sick irony of the West attacking Syrian government forces: it could open the door to bona-fide terrorists coming to power in the event Damascus falls. Indeed, the US has made no secret that its goal is to remove Assad from power, yet – exactly as was the case with Iraq and Libya – they offer no realistic alternatives to his rule aside from ‘moderate rebels.’

Another irony from yesterday’s brazen attack: Trump used the phrase “mission accomplished” to describe the assault, like it was just another day at the golf course. The remark echoed former US President George W Bush’s premature speech on board the USS Abraham Lincoln aircraft carrier in 2003 when he declared the end of combat operations in Iraq in front of a banner declaring “Mission Accomplished.” Yet in reality that was just the beginning of the nightmare for Iraq.

A perfectly executed strike last night. Thank you to France and the United Kingdom for their wisdom and the power of their fine Military. Could not have had a better result. Mission Accomplished!

At this point, the question must be asked: What sort of dire affliction has infected the Western mind to the point where it believes it can act with impunity against multiple sovereign states? My personal guess is that America and the West are struggling with the uncomfortable realization that their ‘unipolar moment’ is setting fast below the horizon.

Soon after the collapse of the Soviet Union, the United States began to indulge itself in increasingly belligerent behavior across a wider and wider swath of the planet. The juggernaut was made all the more harrowing by America’s almost fanatical belief that it is the one and only ‘indispensable nation’ blessed by some higher authority with ‘exceptional’ qualities that are beyond question. This was America’s ‘unipolar moment.’

That open window of militaristic opportunity was applauded by neoconservatives, including Charles Krauthammer, who penned a 1990 article in Foreign Affairs (‘The Unipolar Moment’) where he boldly states: “The immediate post-Cold War world is not multipolar. It is unipolar. The center of world power is the unchallenged superpower, the United States, attended by its Western allies.”

This is pure unadulterated Machiavellian thinking, which substitutes liberty and equality before the law with a medieval ‘might is right’ philosophy. Yet, as has been proven time and again throughout history, whenever any single country sits astride the pinnacle of power, it is invariably proven, in the words of British politician Lord Acton that, “power tends to corrupt, and absolute power corrupts absolutely.”

This tendency towards the abuse of power was highlighted by a shocking comment made by General Wesley Clark during an interview with Democracy Now. Clark revealed that he had been shown a memo by one of his military superiors that outlined a classified plan to take out seven countries in a five-year period.

“This is a memo that describes how we’re going to take out seven countries in five years, starting with Iraq, and then Syria, Lebanon, Libya, Somalia, Sudan and, finishing off, Iran,” Wesley said, repeating what he had been told and shown.

Coincidence or not, many of the names on that list have experienced the full wrath of the Western military in one way or another. However, given the rise of a multipolar world, this diabolical shopping list has been put on hold, hopefully forever.

Whatever the case may be, it has become beyond clear that the West holds the claim to the title ‘protector of democratic principles’ only by the force of its lies, deception and outright aggression. How long it will be before the charade ends and the people openly proclaim that the emperor has no clothes is anybody’s guess.