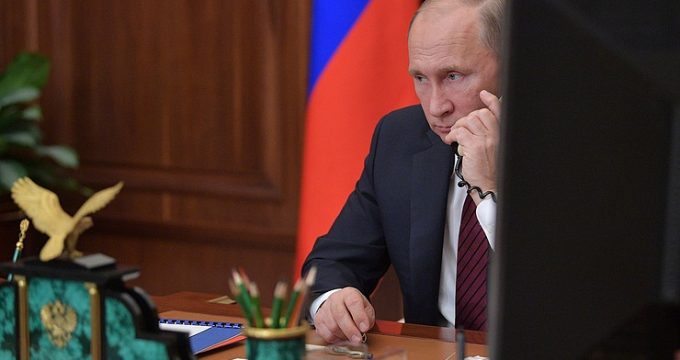 Reuters– Russian President Vladimir Putin warned on Sunday that further Western attacks on Syria would bring chaos to world affairs, while signs emerged that Moscow and Washington want to pull back from the worst crisis in their relations for years.

Putin made his remarks in a telephone conversation with Iranian counterpart Hassan Rouhani after the United States, France and Britain launched missile strikes on Syria on Saturday over a suspected poison gas attack.

A Kremlin statement said Putin and Rouhani agreed that the Western strikes had damaged the chances of achieving a political resolution in the multi-sided, seven-year conflict that has killed at least half a million people.

“Vladimir Putin, in particular, stressed that if such actions committed in violation of the U.N. Charter continue, then it will inevitably lead to chaos in international relations,” a Kremlin statement said.

The attacks struck at the heart of Syria’s chemical weapons program, Washington said, in retaliation for a suspected poison gas attack a week ago. All three participants insisted the strikes were not aimed at toppling President Bashar al-Assad or intervening in the conflict.

The bombings, hailed by U.S. President Donald Trump as a success but denounced by Damascus and its allies as an act of aggression, marked the biggest intervention by Western countries against Assad and ally Russia, whose foreign minister Sergei Lavrov called them “unacceptable and lawless”.

When asked whether Russia was prepared to work with the proposals of Western countries at the United Nations, Ryabkov told TASS news agency: “Now the political situation is extremely tense, the atmosphere is extremely electrified, so I will not make any predictions.