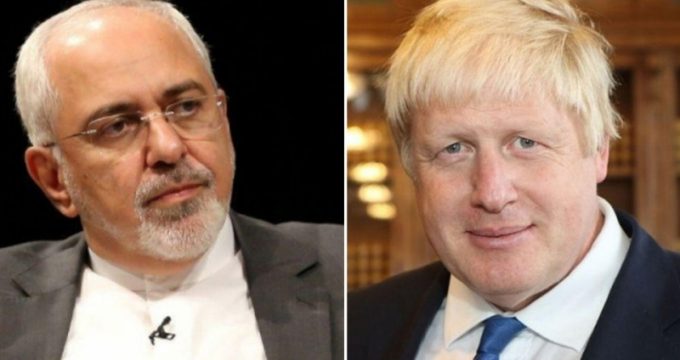 Johnson briefed Zarif on the the UK participation in the missile attack on Syria.

Zarif also slammed the uncoordinated and arbitrary attack on Syria.

He reiterated that Iran is against using any chemical attack.

The Iranian Foreign Minister reminded Johnson of using chemical weapons by Saddam Hussein against Iran under the support of the US, the UK and France.

Two attacks have been conducted against Syria so far both on false claims that Damascus had used chemical weapons against Syrian people and both mounted against the country exactly when Syrians had gotten the upper-hand against terrorists putting them on the verge of defeat, Zarif said describing as questionable performing the attack before Organization for the Prohibition of Chemical Weapons (OPCW) experts’ probe.

‘We had earlier announced that the armed groups had the chemical weapons, but no attentions have been made,’ he said.

Zarif added that no country is allowed to execute punitive measures against other countries out of the international regulations scope, he added.

The US together with its allies, the UK and France targeted the Syrian capital city of Damascus early Saturday.

The US attack on a military base in Homs, western Syria, injured 3 civilians, Syrian Arab News Agency (SANA) had earlier reported.