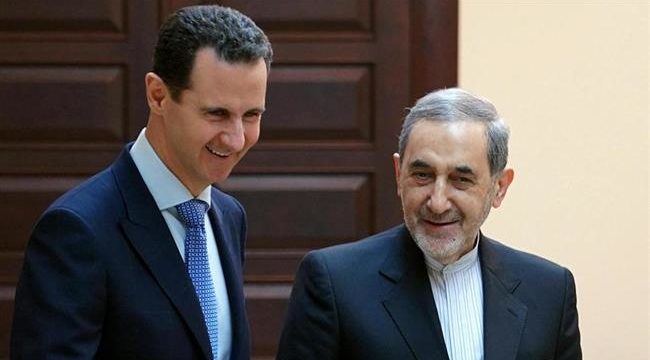 April 14, The Iran Project – Senior Aide to Iranian Leader Ali Akbar Velayati arrived in Syria on Tuesday (April 10) to participate in an international conference dubbed ‘Quds, Our Approach and Destination’ and hold talks with top Syrian officials as well.

Velayati also paid a visit to the Eastern Ghouta in Damascus suburb and met with the Syrian forces and commanders in the region.

The Syrian field commanders explained the operation against the terrorist groups and showed the visiting Iranian official the tunnels used by the terrorists to attack Damascus civilian areas.

Speaking to IRNA, Velyati said that the Israeli regime’s action in attacking Syrian air base, killing several Syrians and Iranians, “will definitely not go unanswered.”

On Monday (April 9), the T-4 air base in Homs province in northern Damascus, Syria, was targeted by eight Israeli rockets, and according to the Russian defense ministry, five of them were intercepted and destroyed, but other three rockets hit the air base. According to the report by Syrian media, at least 15 Syrians and Iranians were killed in the attack.

Addressing the conference, Velayati urged the Islamic World elites to make attempts to unite Muslim Ummah, adding that difference of point of view among Muslims is a natural issue, but unity and brotherhood are necessary to counter enemies.

The official said that despite war difficulties, the Syrian nation have not forgotten the Holy Quds, noting that Wahhabism is behind all terrorist moves against the people of region.

Meanwhile, Velayati and Muallem in a meeting in Damascus stressed increasing coordination between Iran and Syria in fighting terrorism.

The both sides reviewed ways to reinforce all-out strategic ties between Tehran and Damascus, the newest developments in Syria and the region under the shadow of Syrian army and Resistance forces battlefield victories.

The Syrian FM informed Iranian official of the recent political and battlefield developments in Syria and also appreciated Iran’s all-out supports of Damascus.

Also, Velayati underscored the continuation of Iran’s support for the Syrian government and people and the Resistance against terrorism that has targeted territorial integrity of Syria and stability in the region.

Talking to al-Hilal, Velayati said that as a result of the Syrian military victories on terrorists, the country is now stronger than any other time.

Velayati underlined depth of bilateral ties between Iran and Syria and stated that these relations are strengthening and expanding day-by-day in all fields.

Al-Hilal, for his part, said that bilateral ties between the two countries played an important role in achieving victory on terrorism.

During a meeting, Velayati and President Assad conferred on the latest regional developments, the status of bilateral relations, as well as the recent US threats against Syria’s territorial integrity and national sovereignty.

“It has been seven years since a full-scale war was waged against the Syrian people and government, directly led by the United States and involving tens of other countries,” Velayati said.

President Assad stressed that any possible military action by the West against Syria will lead to further instability across the region; adding that the possible attacks that the US and the West are talking about will ultimately endanger the international peace and security.

The Syrian president went on to say, “any victory achieved by the Resistance forces unsettles the Western countries and prompts them to take suspicious actions in a bid to change equations on the battlefield.”