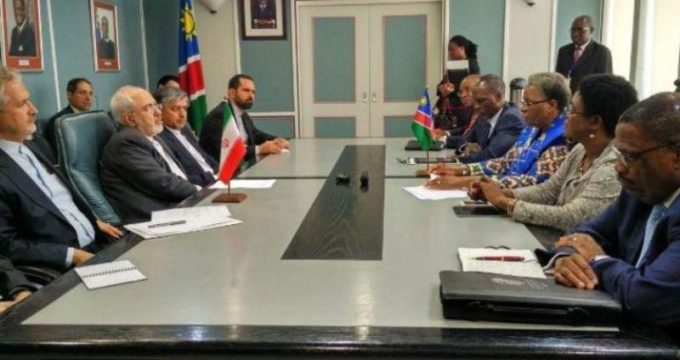 FM Zarif wraps up his six-day tour to Africa & LatAm

April 14, The Iran Project – On the fourth and final leg of his tour to Africa, Iran’s Foreign Minister Mohammad Javad Zarif arrived in Namibia on Thursday (April 25) and eventually wrapped up his six-day tour to Africa and Latin America.

During the talks, the Iranian foreign minister highlighted the significance of Iran’s cooperation with Namibia in Southern Africa, calling for further enhancement of the two sides’ relations in all areas, especially in the field of banking, to facilitate the operation of Iranian and Namibian private sectors.

The Iranian top diplomat also voiced the Islamic Republic of Iran’s preparedness to develop cooperation with Namibia in such fields as energy, water, construction, agriculture and new technologies.

For his part, the Namibian foreign minister welcomed any investment by Iran in agriculture and energy fields, particularly in renewable energies.

He also voiced his country’s support for the rights of the Palestinian people and condemned the Israeli army’s latest attacks on them.

Nandi-Ndaitwah further vehemently slammed any use of chemical weapons in Syria and called for efforts to restore peace and stability to the country.

Eventually, Zarif who took a tour to four African and Southern American countries arrived in Tehran on Friday (April 13).

In a Twitter message on Friday, Zarif welcomed his recent tour to Africa and Latin America.

“Just returned from fruitful visits to Senegal, Brazil, Uruguay and Namibia, accompanied by tens of Iranian CEOs. Many contracts signed; more on horizon. Iran, open to, and for, business with its many friends across the globe,” Zarif said in his Twitter message.

In Senegal he held talks with high-ranking Senegalese officials, including his counterpart Sidiki Kaba. Both countries agreed to have a joint economic commission in coming months in line with the goals of boosting trade ties between the two countries.

He arrived in Montevideo, Uruguay on Wednesday and held talks with the President of Uruguay, Tabaré Vázquez.