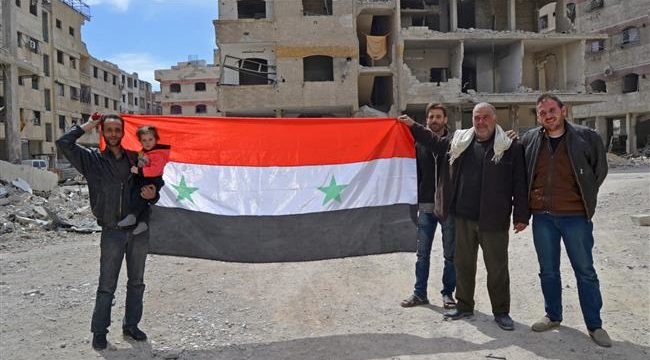 Press TV- Russia says the Syrian army has liberated Douma, the last Eastern Ghouta town under militant control, less than two months into its counter-terrorism operation in the suburban area near the capital, Damascus.

“The raised state flag over a building in the town of Douma has heralded the control over this location and therefore over the whole of eastern Ghouta,” Major-General Yuri Yevtushenko, head of the Russian peace and reconciliation center in Syria, was quoted as saying by Russian media.

Eastern Ghouta used to serve as a launch pad for deadly terrorist attacks against residents and civilian infrastructure in Damascus.

The Russian military was providing air cover to Syria’s liberation operation, which had begun on February 19.

Russia’s Defense Ministry said Russian military police had been deployed in Douma as of Thursday.

“They are the guarantors of law and order in the town,” the ministry was quoted by Russia’s RIA news agency as saying.

Recently, Moscow brokered an agreement between the militants based there and the Syrian government, enabling the former’s safe exit to Jarabulus, a militant-held town in northern Syria.

Russia said hundreds of Takfiri Jaish al-Islam militants and their families had left Douma, according to the deal.

But the terrorist group has sought to remain in the town as a local force, the so-called Syrian Observatory for Human Rights said. The demand has been rejected.

The liberation of Douma came amid the looming threats of a US military action against the government of Syrian President Bashar al-Assad following Saturday’s suspected chemical weapons attack on the Syrian town.

PressTV-‘US jets flying over Syria’ amid threat of imminent strike

Reports suggest American jets are patrolling the skies above Syria as the threat of military action over an alleged chemical attack looms large.

A number of Washington’s Western allies and Saudi Arabia have also said they would join a military action against Syria.

US President Donald Trump posted a fiery tweet earlier on Wednesday, in which he warned Russia — one of Syria’s key supporters in the war against foreign-backed militancy — that it should get prepared to “shoot down” missiles that the US military would soon rain down over Syrian targets.

The suspected chemical attack was reported just as the Syrian army was about to liberate Douma. The US and its allies were as usual quick to blame Damascus for the incident without any evidence and before the launch of a probe.

Syria has firmly denied any links to the attack, which reportedly killed at least 60 people and wounded more than 1,000 others. Russia says the number of casualties is not true.

Moscow and Damascus have called on the Organization for the Prohibition of Chemical Weapons (OPCW) to investigate the attack and find the real perpetrators.