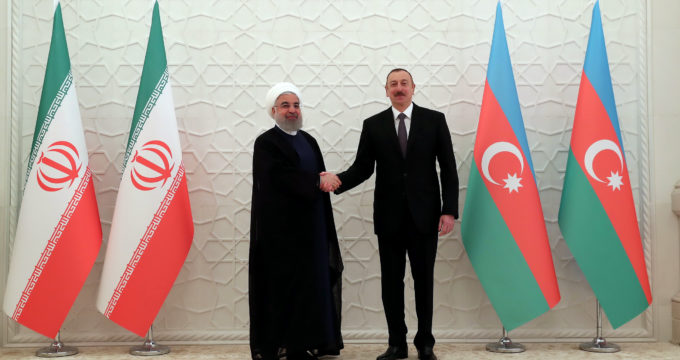 Tasnim – Iranian President Hassan Rouhani congratulated Ilham Aliyev on his re-election as the president of the Republic of Azerbaijan.

In a message on Thursday, Rouhani described the result of the presidential election in the neighboring country as a sign of the Azeri people’s support for the Baku government’s programs and their interest in the continuation of their country’s development and progress.

He also expressed the hope that the developing trend of the “friendly and brotherly” relations between the Islamic Republic of Iran and the Republic of Azerbaijan, which is rooted in the historical, religious and cultural commonalities of the two nations, will vigorously continue through the efforts of the two sides’ officials.

Elsewhere in his message, the Iranian president prayed to the Almighty for health and success for his Azeri counterpart and happiness and prosperity for the neighboring country’s people.

Aliyev secured his fourth consecutive term in a snap election on Wednesday, according to partial results.

“Ilham Aliyev is leading … He got 86.09 percent of votes,” Mazahir Panahov, the Central Election Commission chairman told a news conference. The partial results were based on the 65 percent of the ballots counted, he said.

“I am grateful to my people for voting for our achievements and success,” Aliyev said on state television, soon after the election commission announced the first results. “People voted for stability, security and development.”

Dozens of cars honking and carrying the flags of Azerbaijan and Aliyev’s ruling party cruised down Oilman Avenue, a central Baku thoroughfare whose high-priced boutiques have come to symbolize the massive oil revenues enjoyed by the Azeri elite.

The election commission said turnout was about 75 percent and there were no complaints about irregularities.

During Rouhani’s visit to Baku last month, high-ranking officials from Iran and Azerbaijan signed eight memorandums of understating (MoUs) to boost cooperation in different fields, including economy and culture.