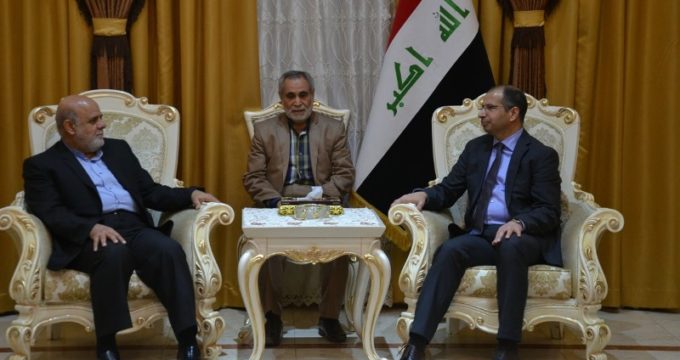 IRNA – Speaker of the Iraqi parliament Salim al-Jbouri said that Iran and Iraq need to enhance their relations during reconstruction era in Iraq.

Lauding Iran’s role in fighting terrorism and supporting stability and security of Iraq, the Iraqi lawmaker said in a meeting with Iraj Masjedi, Iran’s ambassador to Baghdad, ‘The two countries have various interests in common, and bilateral relations should be promoted in every fields.’

Echoing the necessity of boosting Iran-Iraq ties, the Iranian envoy said that in the reconstruction era, like the period during which the Iranian people and government stood beside their neighbore, Iran, particularly its private sector will work shoulder to shoulder with Iraq.

He also highlighted the need to enhance cooperation between Tehran and Baghdad on economy, trade and development in favor of the two countries’ interests.

The talks were focused on bilateral issues and the latest developments in Iraq and the region.