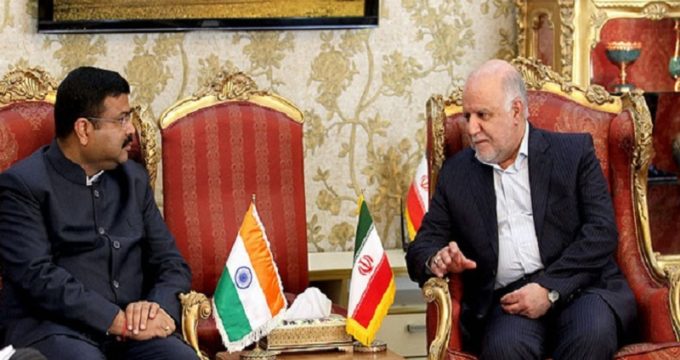 IRNA – Iran’s Oil Minister Bijan Namdar Zangeneh arrived here Wednesday morning to take part in the 16th Ministerial session of the International Energy Forum (IEF16).
According to IRNA correspondent, he is to address a special panel later on the day.

Before the formal inauguration of the gathering, he met with his Indian counterpart Darmendra Pradhan during which the two ministers discussed issues of mutual interest.

Issues concerning bilateral cooperation on the development of the Iranian gas field called ‘Farzad B’ were among the issues discussed during the meeting.

The IEF16 was inaugurated today by the Indian Prime Minister Narendra Modi.

It is to focus on the latest developments in the global energy market, transition policies and technologies which affect the stability and future of investments in energy sector.

Iran is an active member of the executive board of the forum.

Zangeneh already noted that during President Hassan Rouhani’s recent visit to India, the two countries agreed in principle on development of Farzad B oilfield.

Indian oil and gas company ONGC Videsh has finalized a plan worth over three billion dollars to develop Farzad B oilfield for which it has proposed amendments.

During Rouhani’s trip to India in mid-February, 15 documents were signed by the two countries.

Indian companies expressed interest in investing in Farzad B oilfield which was approved by the Iranian president.