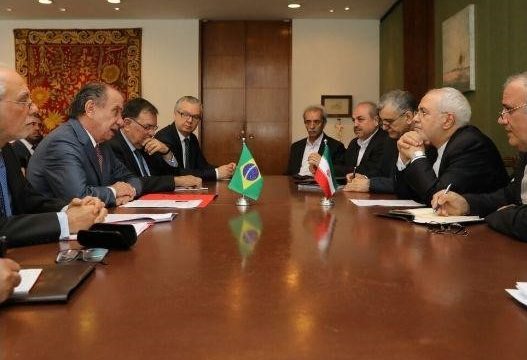 Maintaining joint cooperation on exporting Iranian oil products and exchanging technical delegations to establish organizational relations between Tehran and Mercosur were among other topics reviewed by Iranian and Brazilian FMs.

Mercosur is a South American trade bloc established by the Treaty of Asunción in 1991 and Protocol of Ouro Preto in 1994. Its full members are Argentina, Brazil, Paraguay and Uruguay.

He underlined the importance of removing banking problems and creating a banking channel to facilitate trade exchanges.

Zarif was in Senegal on Monday morning on the first leg of his tour to four African and South American countries.

Scores of officials in economic, financial and knowledge-based fields from state and private sectors are accompanying Zarif during his trip.

After Brazil Zarif went to Uruguay on the third leg of his tour.