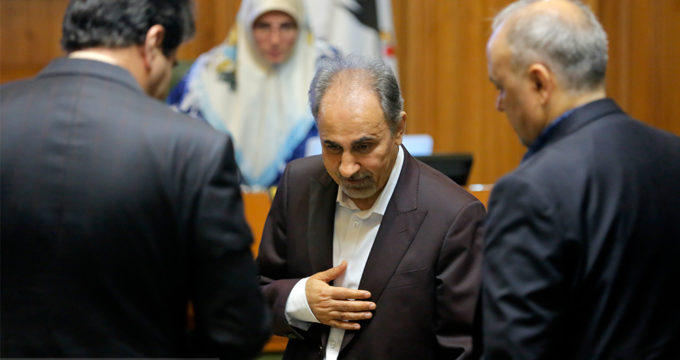 Tehran mayor quits after claims he was threatened with arrest

Bourse and Bazaar | AFP: Tehran’s reformist mayor was replaced on Tuesday following claims he was threatened with arrest if he did not step down. Mohammad Ali Najafi, who took power after reformists swept the council elections last May, said he was suffering from unspecified health problems that required extensive treatment.

But his allies say he was under pressure after accusing his conservative predecessors of corruption. Morteza Alviri, a member of the council and a former mayor, said on Sunday that Najafi was summoned one night to the prosecutor’s office.

“I’m informed he was summoned, not in a polite manner”, Alviri said in a video posted on the reformist Khabaronline website. He said Najafi was woken while in bed.

“I heard he was threatened with arrest,” Alviri added. Najafi had attracted criticism from hardliners last month after attending a show at City Hall for Iranian Women’s Day in which schoolgirls performed a traditional dance.

The council rejected his decision, prompting the prosecutor general to accuse them of playing “a political game” and calling on Najafi to submit a fresh resignation, which he did on Monday.

The second resignation was approved by the council on Tuesday, and he has been temporarily replaced by a deputy, Samiollah Hosseini Makarm.

Najafi’s supporters strongly criticized the prosecutor’s involvement, and asked why he was not instead focused on the corruption allegations revealed by the mayor.

Reformists displaced the conservatives for the first time in 14 years in last year’s municipal elections.

In January, Najafi presented a report on the previous administration, run by former police chief and presidential candidate Mohammad Bagher Ghalibaf, saying large sums had been diverted from council contracts into officials’ pockets.

The report said thousands were being kept on the payroll in non-existent jobs, according to the semi-official ISNA news agency, and an extra 13,000 added ahead of the election.

“Inside the municipality, there have been many serious financial violations, but no one has been invited to explain these violations,” Alviri told Khabaronline.