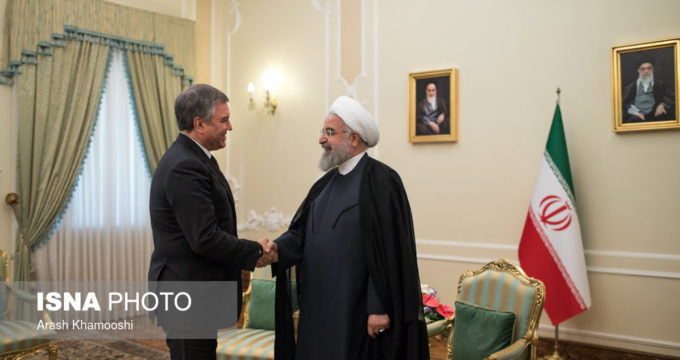 President of Russian Duma confers with Iranian officials in Tehran

While in Tehran, he held separate meetings with Iranian President Hassan Rouhani and his counterpart Ali Larijani.

The Iranian and Russian parliamentary officials then attended a press conference, highlighting the need for expansion of economic relations as well as cooperation on establishing sustainable security across the region.

Talking to Viaceslav, President Rouhani lauded the current high-level cooperation with Russia and called for the elevation of ties to the strategic levels. Describing Iran and Russia cooperation in Syria as fruitful, he said that the two countries would continue cooperation till full-scale security in the war-torn region.

During the meeting, the Russian official stated that his country’s parliament supports the two countries’ president agreements and decisions.

He said that Russia and Iran are facing similar challenge, adding that Moscow is committed to increase cooperation with Iran.

Zarif presented his views on the current conditions of international system, procedures, players and the future landscape.

Also on the same day in a meeting with Andrey Bystritskiy, head of the Russian delegation, member of the Expediency Council (EC) Ali Akbar Velayati underlined the country’s commitment to broaden cooperation with Russia, noting that the two countries have developed their relations in various fields and the Iranian and Russian high-ranking officials are seriously committed to continue this process.

Bystritskiy, for his part, said that increase of trust building and understanding between the two countries is necessary.

The Valdai Discussion Club is a Moscow-based think tank, established in 2004. It is named after Lake Valdai, which is located close to Veliky Novgorod, where the Club’s first meeting took place.