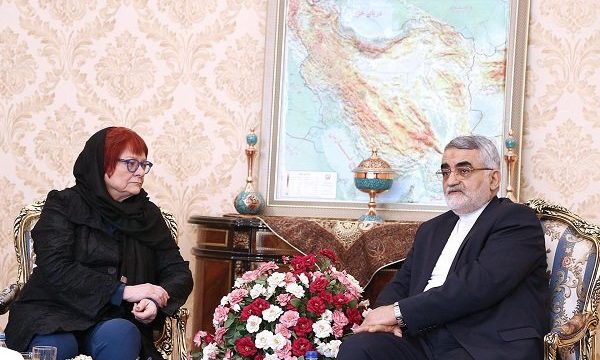 MNA – In a meeting on Tuesday, Alaeddin Boroujerdi, the Chairman of Iran’s Parliament National Security and Foreign Policy Commission, asserted that Iran will never try to achieve nuclear bomb.

“Iran’s opposition with nuclear bomb is an unchangeable principle and the use of nuclear weapons is a red line for the Islamic Republic of Iran,” said Alaeddin Boroujerdi, the Chairman of Iran’s Parliament National Security and Foreign Policy Commission, on Tuesday.

The Iranian senior lawmaker made the remarks during a meeting with the visiting Executive Director of the Nuclear Disarmament and Security Europe Network, in Tehran.

The Iranian legislator referred to, in the beginning of this meeting, the recent decisions of US President Trump and reassured that the Islamic Republic of Iran will complete its nuclear program with much more power than what was followed before the JCPOA agreement of 2015.

He also highlighted that in addition to being a member of NPT (Treaty on the Non-Proliferation of Nuclear Weapons), is following the decrees of Ayatollah Khamenei who have declared it religiously prohibited to use nuclear weapon.