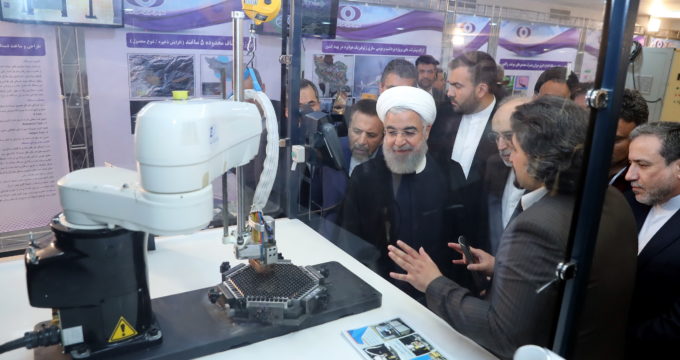 IRNA – Iran’s President Hassan Rouhani unveiled 83 nuclear achievements of the country on Monday that is designated as the National Nuclear Technology Day.

In a ceremony on the occasion of the 12th anniversary of Iran’s National Nuclear Technology Day (April 9), Rouhani and Ali-Akbar Salehi, Head of the Atomic Energy Organization of Iran visited an exhibition on nuclear industry achievements of the country.

At the exhibition, the Iranian president unveiled 83 nuclear achievements, including 74 cases that were unveiled through video conferences.

The achievements were in the fields of centrifuges, separation and nuclear medicine.

In the ceremony, attended by representatives of foreign countries, Rouhani is scheduled to deliver a speech following a report by Salehi on the activities and achievements of the Atomic Energy Organization of Iran.