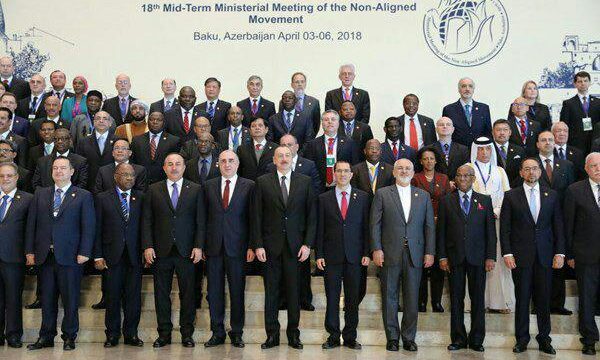 While in Baku, Zarif addressed the NAM conference, attended a meeting of the NAM Ministerial Committee on Palestine, and met with his counterparts from North Korea, Libya, Afghanistan, Palestine, India, Venezuela, Serbia, the head of the delegations from Syria and Cuba as well as Miroslav Lajčák, the current President of the United Nations General Assembly.

Zarif and the officials discussed bilateral relations, international issues and those related to the Non-Aligned Movement.

Talking to reporters upon his arrival in the Heydar Aliyev International Airport in Baku, he noted that multilateralism is one of the issues NAM has always underlined.

Addressing the conference, Zarif said NAM must continue to be at the forefront of promoting multilateral decision-making, resisting the rising unilateralism.

He added that the free hand given to Israel is a sign of new rising unilateralism, which is once more becoming the main threat against global security. The previous wave of unilateralism in early 2000s destabilized our region in catastrophic proportions, gave rise to violent extremism and terrorism and exacerbated tensions and crises in West Asia and beyond. Even today and despite the territorial defeat of Daesh by the valiant resistance of the Iraqi and Syrian people, our region is still suffering from the remnants of terrorist groups as well as their suspicious relocations.

Delivering a speech at NAM Ministerial Committee on Palestine, Zarif said the  new round of repression and massacre of unarmed Palestinian peaceful protesters in Gaza, including women and children, is the latest in an old pattern followed by the Israeli regime in the past seven decades.

Eventually, Iranian foreign minister on Friday morning departed from Azerbaijani capital to the Nakhchivan Autonomous Republic upon an official invitation of the autonomous region’s top officials.