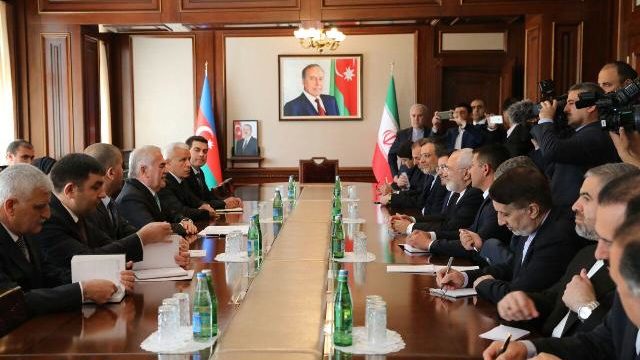 IRNA – Iranian foreign minister on Friday expressed satisfaction with the level of relations with Nakhchivan Autonomous Republic and called for elevation of all-out ties with the region.

He said that Iran’s power plants and dam construction projects have become operational adding that there are good grounds for cooperation in fields of industrial livestock production, health, pharmacy, tourism, transit and food industry.

The Iranian foreign minister also called for improvement of banking relations, exchange of students and academics as well as elevation of relations between Nakhchivan and the Iranian northwestern provinces of East Azarbaijan and West Azarbaijan.

He pointed to the decision of the sixth conference of culture ministers of the Organization of Islamic Cooperation (OIC) in Baku in October 2009 to declare Nakhchivan the capital of Islamic culture for 2018 and Iranian city of Tabriz the capital of tourism and called for increase of cooperation between the two cities.

During the meeting, Talibov said that relations with the Islamic Republic of Iran in various fields are progressing.

‘The people of Iran and Nakhchivan are easily going back and forth between the two countries, the number of tourists has increased, and the Iranian students are continuing their education there without any problem,’ he said.

The lawmaker also called for increase of cooperation between Iran and the autonomous region in custom affairs.

Zarif departed from Azerbaijani capital, Baku for the Nakhchivan Autonomous Republic on Friday morning. During his stay in Nakhchivan, he paid a visit to Duzdag physiotherapy center.

Nakhchivan Autonomous Republic is the last leg of Zarif’s tour of the region. He was in Baku before traveling to Nakhchivan to attend the Mid-Term Ministerial Conference of NAM April 5-6.

In the first leg of his tour of the region, Zarif accompanied President Hassan Rouhani during his visit to the Turkish capital, Ankara and attended Iran, Russia and Turkey’s trilateral summit on Syria.