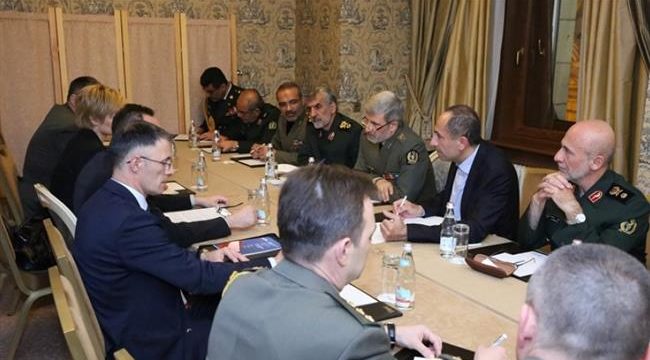 Press TV – Iran’s defense minister has denounced the United States for failing to respect international agreements, saying Washington is now seeking to deprive the Islamic Republic of the benefits of its 2015 nuclear deal with six world powers, which is officially known as the Joint Comprehensive Plan of Action (JCPOA).

Brigadier General Amir Hatami was speaking at a meeting with his Serbian counterpart,  Aleksandar Vulin, in Russia on the sidelines the VII Moscow Conference on International Security.

“Under baseless pretexts and due to its lack of commitment to international accords, the US is making efforts to prevent our country from [collecting] the dividends of this deal,” Hatami added.

He said, however, that Iran’s friends in the international community would not support Washington’s attempts to undermine the JCPOA, which was inked in July 2015 between Iran and the P5+1 countries – Russia, China, France, Britain, and the US plus Germany.

The Iranian defense chief also called on the global community and the American public to pressure the White House for violating its commitments under the JCPOA.

Under the nuclear deal, Iran agreed to curbs and inspections on its nuclear program in exchange for the removal of the nuclear-related bans.

However, the US, under President Donald Trump, has adopted a hostile rhetoric against the multinational deal, drawing criticism from the other parties to the JCPOA and the entire international community.

Trump, who once threatened he would tear up the JCPOA, has given the European signatories to the deal until May 12 to either fix “the flaws” in the deal or Washington would withdraw.

Given the geopolitical importance of Iran and Serbia, “defense cooperation between the two countries could greatly contribute to regional security and stability,” Hatami emphasized.

The Serbian minister, in turn, highlighted friendly relations between the two countries, praising Iran’s policies for the promotion of peace in the region.

‘Region must stand against US meddling’

The Iranian minister called for a united regional front against Washington’s meddlesome policies, saying, “Through their sinister plots, the Americans have created instability, insecurity and chaos in the region.”

Hatami added that Pakistan, as a friendly and neighboring country, enjoys a special position in Iran’s foreign policy, calling for closer Tehran-Islamabad cooperation in the field of defense and technology.

His Pakistani counterpart, for his turn, highlighted the security threats facing West Asia, saying that the two neighbors should increase their interactions to tackle regional problems.

The meeting took place amid Pakistan’s troubled ties with the US. Trump accuses Pakistan of supporting terrorism, in general, and the Afghan Taliban militant group, in particular. Islamabad strongly denies those claims.

During the meeting, Hatami blamed the policies of US and Israel for the spread of terrorism and extremism in the region.

The hegemonic system, he said, is using the terror groups as proxies to destabilize the region and plunder the wealth of its nations.

Thanks to its “precise understanding of the root causes of terrorism,” Iran successfully helped the Iraqi and Syrian nations target terror at the root, Hatami said.

The Kazakh minister, for his part, lauded joint efforts by Iran, Russia and Turkey to help resolve the crisis in Syria and reduce the violence gripping the Arab state.

The two sides also stressed the need to boost Iran-Kazakhstan relations in all areas.