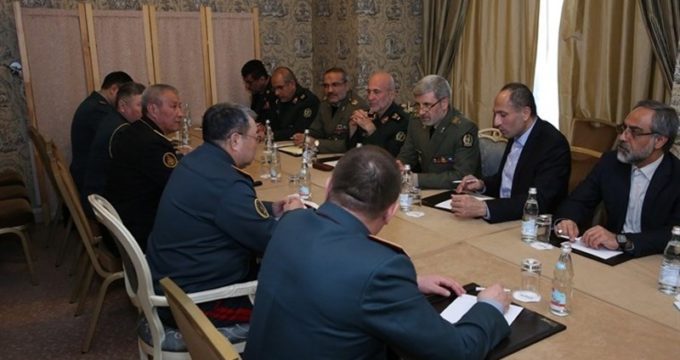 Iran aided Syria, Iraq ‘with all might’ to eradicate terrorism

MNA – Minister of Defense Amir Hatami said Wed. that Iran assisted Syria and Iraq in the fight against terrorism with all its might so that they could uproot terrorism in their respective countries.

Brigadier General Amir Hatami made the remarks in a meeting with Kazakhstan’s Minister of Defense and Aerospace Industry Beibut Atamkulov on the sidelines of the 7th Moscow Conference on International Security on Wednesday.

During the meeting which was held in the Russian capital, the Iranian defense minister hailed the cooperation between Iran and Kazakhstan in international communities as a good model for bilateral relations in the region, and called for further development of ties.

Hatami then discussed the current situation in the Middle East, stressing that extremism was being used by the US and Israeli regime to advance their objectives in the region; “profit-seeking and exploiting terrorist groups to plunder the resources and riches of regional countries has always been one of the objectives of the dominating powers,” he added.

The Kazakh minister of defense, for his part, commended the joint cooperation between Iran, Russia and Turkey in combating terrorism and preventing the escalation of tension in Syria.

He also expressed hope that by reaching an agreement on the Caspian Sea legal regime, the littoral states would be able to take greater measures in developing political, military and economic cooperation.

During the meeting, the sides reviewed bilateral defense and security relations, and reached an agreement on developing cooperation between the two countries.