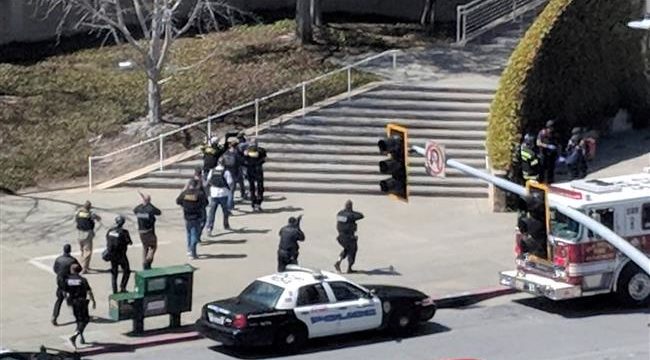 Press TV – An “active shooter” has opened fire at the YouTube headquarters in San Bruno, California, prompting terrified employees to run for their lives and inflicting a number of casualties before taking own life.

The video platform company’s offices were placed on lockdown on Tuesday afternoon and police in the city warned people to stay away from the area.

“We are responding to an active shooter. Please stay away from Cherry Ave & Bay Hill Drive,” San Bruno police said on Twitter.

Online footage showed armed officers arriving at the campus near San Francisco, with reports from witnesses and local media saying that the shooter was a “woman.”

Multiple reports from employees said the shooting began around lunch time, when many people were eating on a patio in the rear of the building.

“At that point every new person I saw was a potential shooter. Someone else said that the person shot out the back doors and then shot themselves,” Todd Shermanon, a YouTube product manager, said on Twitter.

“I looked down and saw blood drips on the floor and stairs. Peaked around for threats and then we headed downstairs and out the front,” he noted.

Hospital officials said they had received between four to five casualties following the incident and law enforcement sources also confirmed to the media that the female shooter was “dead” at the scene.

Police said an investigation into the incident and motive behind it was underway.

More than 1,100 staffers, including engineers, sales teams, analysts and more work at YouTube’s San Bruno office, which is located 12 miles south of San Francisco and near the San Francisco airport.

The multi-story building, which was reportedly bought by Google in 2015, includes a basketball court, a lap pool and a slide connecting the second and third floors. The doors to its headquarters are typically locked, and visitors have to be buzzed in by someone at the front desk.