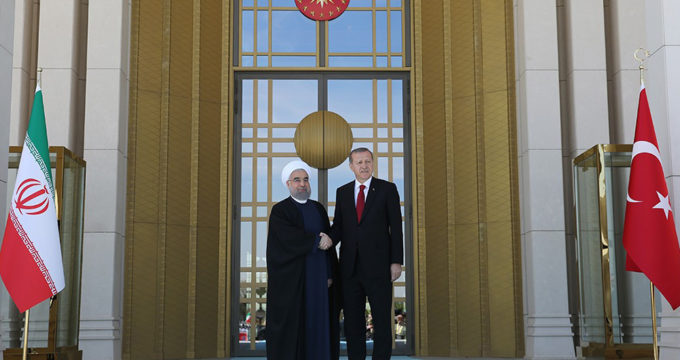 President Rouhani is to hold a separate meeting with his Turkish counterpart within minutes and is also scheduled to meet his Russian President Veladimir Putin today.

President Rouhani arrived in Ankara late Tuesday at the head of a delegation to attend the trilateral meeting with his Turkish and Russian counterparts on the latest developments in Syria.

The trilateral summit of Iran, Russia and Turkey on the Syrian situation is scheduled to be held at the level of senior experts, foreign ministers and heads of states in the Turkish capital for two days.

The meeting is the second round of troika talks in continuation of Astana talks and Sochi summit which has been planned to help promote cooperation to find a solution to the civil war in Syria.

The participants will negotiate upholding Syria’s sovereignty, independence and territorial integrity and adopt new measures to sustain ceasefire as well as explore avenues for preventing violation of ceasefire in de-escalation zones.

Meanwhile, Iranian Foreign Minister Mohammad Javad Zarif and his counterparts from Russia and Turkey Sergei Lavrov and Mevlut Cavusoglu, are also attending the event. They will finalize the topics to be discussed by the three presidents and draw out draft for the summit.

The first round of presidential-level talks convened in the Black Sea resort of Sochi in November 2017.

Tehran, Moscow, and Ankara are guarantors of the Syria peace process, an initiative brokered in the Kazakh capital of Astana to find a peaceful solution to the Syria war.