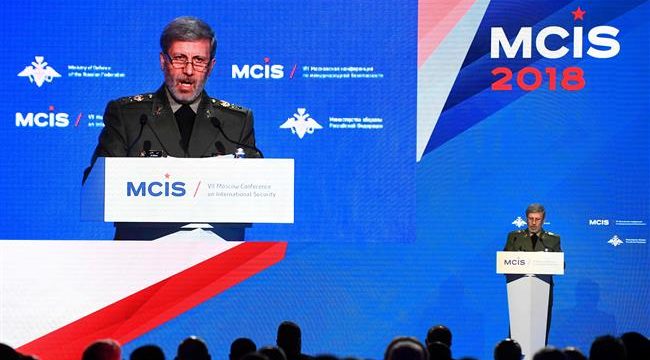 Def. min.: Iran opposes any kind of aggression against Syria

MNA – Iran opposes any aggression against any nations such as Syria, according to Iranian defense minister, adding that Syria’s territorial integrity and national sovereignty must be respected.

Brigadier General Amir Hatami made the remarks in his address to the ‘VII Moscow Conference on International Security,’ which is underway in the Russian capital on April 4-5.

He added “we see the agreement (the JCPOA) as a successful example of international cooperation, and as a result of all parties’ efforts and cooperation within the framework of mutual respect for national and international rights.”

He underlined that Tehran considers the strengthening of its defense power, particularly its missile defense system as a natural right and sees it necessary to repel diverse and emerging threats, adding that Iran will resolutely continue the missile program.

Elsewhere in his speech, Brigadier General Hatami said that although ISIL terrorist group has been defeated through the efforts and sacrifices of the armed forces and people of Iraq and Syria with the full support of Iran and Russia and its threat has declined in West Asia, it takes more time and efforts to annihilate it.

He said that annihilation of that terrorist group needs studying its origins and the thinking behind it.

The Iranian defense minister highlighted that with Trump and his radical team in power, there is no good prospect not only for Iraq and Syria but also for the whole region.