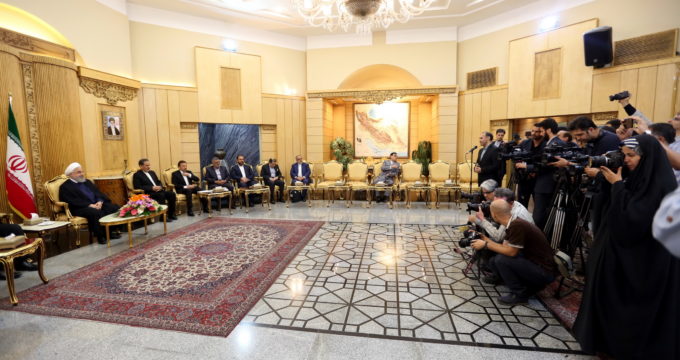 President at Mehrabad Airport: No military solution to Syria

Speaking at Mehrabad Airport on Tuesday before leaving Tehran for Ankara, President Hassan Rouhani said: “In this visit, which is taking place at the official invitation of the President of Turkey, the issue that is going to be discussed is Syria and the future of this country”.

“This is the second summit of the heads of state of Russia, Iran and Turkey on Syria. The first summit was held in Sochi, Russia, following which a congress was held between the opposition and the pro-government forces as an important step in the future of Syrian and democracy in this country,” he continued.

He added: “In fact, this is the continuation of the Astana process, in which a lot of effort was devoted to ease tension in Syria and four tension-easing regions were identified and Iran, Russia, Turkey and the Syrian forces are active in each”.

“The intervention of Zionist forces has added to the Syrian crisis and they do not respect national sovereignty of Syria, bomb Syria and support terrorist,” he continued.

“It is true that ISIS has suffered a fundamental loss in Syria but other terrorist groups are still active in Syria and the fight against them must be continued,” he continued.

The President of the Islamic Republic of Iran also said: “The future of Syria belongs to the people of this country and it is the Syrian people who must decide for their own future and the global community must support this wish of the Syrian people”.

“We believe that the presence of foreign forces in Syria without the consent of the government of the country is illegal and irrational and it must be stopped,” he added.

He also went on to say: “We have very important issues to discuss in bilateral and regional fields with Russia and Turkey, which will be discussed in bilateral discussions”.