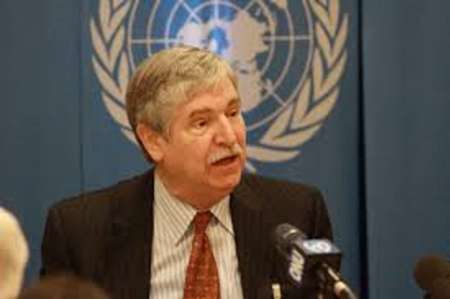 IRNA – Former Deputy Assistant Secretary of State John Limbert reacting to the appointments of John Bolton and Mike Pompeo as the national security advisor and secretary of state said US President Donald Trump is unpredictable.

Limbert, who is one of the signatories of a letter sent to Trump calling for preservation of 2015 Iran nuclear deal with G5+1 known as the Joint comprehensive Plan of Action (JCPOA), made the remarks in an exclusive interview with the Islamic Republic News Agency (IRNA) in New York.

Asked by IRNA why he had signed the letter and why it was necessary for the US to stay in the agreement, Limbert said the accord benefits both the US and other countries which had signed it. In other words, this will have one result and that is a win-win result as the Iranian President (Hassan Rouhani) has called it.

He went on to say that since the very beginning Trump had spoken of leaving the JCPOA but in my opinion the reason for this has nothing to do with the provisions of the accord.

Limbert, also former ambassador of the United States to Mauritania, reiterating once again that Trump is unpredictable, said that in his opinion Trump’s opposition to the JCPOA is because it is the product of the former President Barak Obama’s administration. Everybody knows that Obama has occupied Trump’s mind in such a way that annoys him and forces him to automatically oppose everything that Obama has done.

Asked whether Trump’s action stem from his racist attitude, Limbert replied he did not think so, reasoning that during his presidential campaigns Trump introduced himself as one skilled in holding negotiations and doing business and that he could achieve a better agreement than one reached by someone else.

scoffing at recent changes in the White House and appointments of Bolton and Pompeo, he said there was a simple reason for this. There is a rusted door inside the White House that has not worked properly and it order for it to roll back and forth well, Trump has lubricated it in order to let someone in and send another out.

Asked why Trump fired his former National Security Advisor Herbert Raymond McMaster despite his anti-Iran attitudes and rhetoric against the JCPOA, Limbert said the reason for this is not clear and Trump likes only this door to roll back and forth.

Saying that it was difficult to predict Trump’s behavior, Limbert said Bolton is the third person to be appointed as the national security advisor in the past year. He however said it was not known whether Bolton would remain in his post or would be replaced soon.

Asked whether the appointments of Bolton and Pompeo would strengthen the extremist approaches, he said the president may give a post to someone but this does not necessarily mean that he would listen to them and even it is possible that their differences would widen.

The American veteran diplomat pointed to the Pentagon’s support for the JCPOA and even for negotiations with North Korea particularly in the post- Tillerson era and said if the United States straps the JCPOA unilaterally, how can the president enter into talks with another country particularly North Korea? If the US president decides not to comply with an agreement or leave it whenever he wishes so, then nobody will ever trust his words.

It is evident that presently the United States is involved in several issues such as Syria, Iraq, Afghanistan and Yemen and Pentagon does not certainly want to add to these problems and therefore it supports the JCPOA, he said.

On the other hand, Limbert said, President Trump apparently likes to see all groups around him being at odds with one another and as all have observed this is the current approach of the US president probably because he is very fond of getting involved in all decision-making matters.

In reply to a question regarding to what extent pro-war Bolton can go ahead with his mentality after coming to office, he said he did not really know what his stance would be in his new capacity as the national security advisor.

On the US unilateral exit from the JCPOA, the former American ambassador to Mauritania warned that such an action might pit the United States against Europe, Russia and China.

Referring to recent developments in Russia’s relations with the US and Europe and expulsion of their diplomats, Limbert said Washington-Russia ties are multi-dimensional. On the one hand they have cooperation and on the other they have differences. Russia is one of the signatories to the JCPOA, so are China and European countries. Therefore withdrawal from the agreement would entail a kind of confrontation among these countries.

Underscoring that Iran is one of main parties to the agreement, Limber said imposing new sanctions under other topics in order to satisfy Trump depends on Iran’s viewpoint, ‘This issue is not that simple and we should wait and see whether Iran would accept such a procedure or not.’