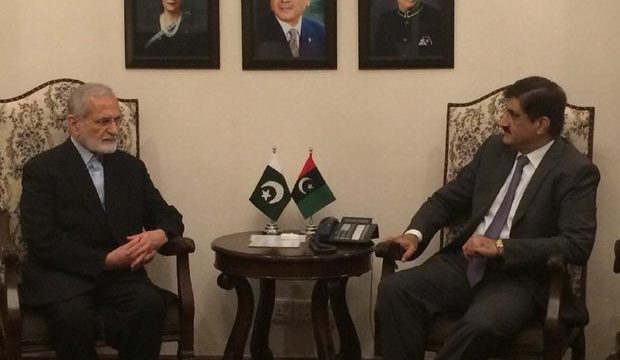 MNA – Head of Iran’s Strategic Council on Foreign Relations has voiced hope that current negotiations with Pakistan would pave the ground for facilitation of banking transactions between the two countries.

Seyyed Kamal Kharrazi made the remark in a meeting with Chief Minister of Sindh province Syed Murad Ali Shah during his visit to Pakistan.

During the meeting which was held on Friday, the Chief Minister of Sindh voiced hope that the two countries’ contract on gas transfer to Pakistan would come into effect as soon as possible.

The Iranian official, for his part, expressed readiness on behalf of Iranian development companies for participating in Sindh’s various projects.

Welcoming the proposal, Murad Ali Shah suggested that Iranian companies could work on joint projects with the Pakistani side.

The two sides also discussed ways to remove the existing banking obstacles. Kharrazi voiced hope that the negotiations between the two sides would lead to the introduction of a Pakistani bank to facilitate banking transactions with Tehran.

Kharrazi further stressed that by easing banking transactions, the level of economic cooperation between the two countries could enjoy a considerable boost.