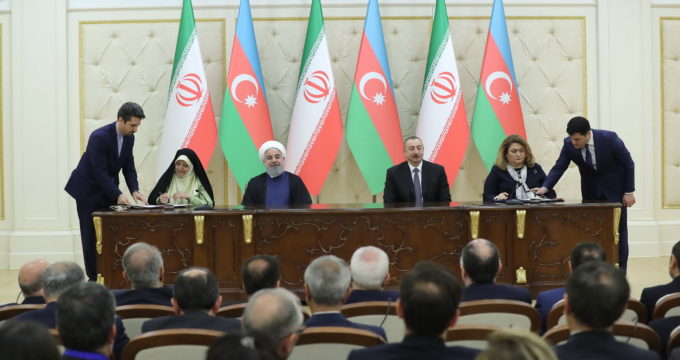 March 29, The Iran Project – On the second leg of his trip to Caspian states, Iran’s President Hassan Rouhani arrived in Baku from Ashgabat on Wednesday (March 28) for an official visit to the Republic of Azerbaijan.

Holding meetings between high-ranking delegations from the two countries, signing memoranda of understanding (MoUs) and agreements by Iranian and Azerbaijani officials, holding talks with his Azeri counterpart Ilham Aliyev, attending joint business forum and opening joint projects are in President Rouhani’s itinerary during the visit.

Addressing the joint meeting between the high-ranking delegations of the Islamic Republic of Iran and the Republic of Azerbaijan in Baku, President Rouhani said the North-South transit corridor on which the two countries are working through implementing Rasht-Astara railway project is a much cheaper, more convenient and shorter path for the two countries, the other states of the region and even for Asia, Europe and Africa.

Earlier on Wednesday, Iran and Azerbaijan signed eight cooperation agreements to promote ties in different sectors, including in the development of oil exploration blocks in the Caspian Sea.

Addressing the press conference following the signing of agreements, President Rouhani hailed the shared views of Tehran and Baku in relations to regional issues.

Also, the presidents of the Islamic Republic of Iran and the Republic of Azerbaijan referred to the ample opportunities to deepen ties between the two countries in various fields.

President Aliyev said common history and culture connects Iran and Azerbaijan and our relations will be built upon this base,” he continued.

Following his meeting with President Aliyev, Rouhani said Iran and Azerbaijan share common viewpoints on regional issues, adding that both states believe that problems in the countries of the region should be settled through political means.

Speaking at the Business Forum of the Islamic Republic of Iran and the Republic of Azerbaijan in Baku, Rouhani lauded the mutual ties, describing the current status of the relations at the best level.

In a meantime, at a ceremony in Baku, President Rouhani and his Azeri counterpart opened Khazar joint car manufacturing factory and the Astara-Astara railway.

Khazar joint car manufacturing factory jointly owned and run by the Islamic Republic of Iran and the Republic of Azerbaijan.

At the end of his regional tour, The Iranian president left Baku for Tehran on Thursday.