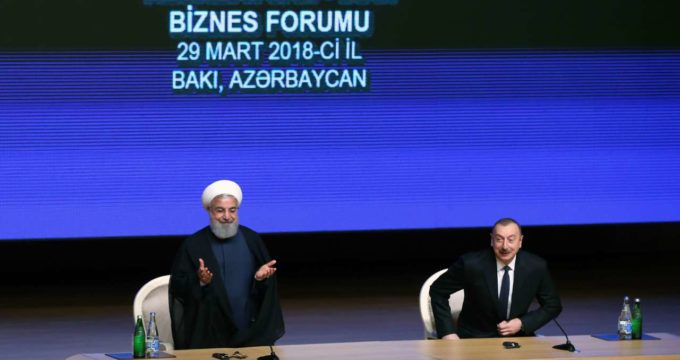 Press TV – Iranian President Hassan Rouhani has hailed amicable ties between Iran and Azerbaijan, saying cooperation between the two neighbors is beneficial to the entire world.

Addressing an Iran-Azerbaijan business forum in Baku on Thursday, Rouhani said, “We are today witnessing the best of ties between the two nations and governments.”

The outcome of such bilateral relations, Rouhani added, will be “in the interest of the region and the whole world.”

The Iranian president said the two sides reached “strategic and historic” decisions during his visit to Baku, including connecting the two countries’ railway networks for transport of goods from the Sea of Oman to Eastern Europe as well as attracting investment for oil and gas exploration in the Caspian Sea.

Rouhani pointed to Iran and Azerbaijan’s joint venture to manufacture automobile and expressed hope for the expansion of bilateral cooperation in other sectors, including in tourism, agriculture, electricity productions, health, pharmaceuticals and new technologies.

Azeri President Ilham Aliyev, who was also attending the forum, said, in turn, that the two sides should work to promote their trade cooperation in proportion to political relations.

He called for more interactions between Iranian and Azeri business sectors to help increase bilateral trade and exports.

The Azeri leader also emphasized the need for closer cooperation in other areas, including energy, tourism, transportation, security and politics.

“Iran-Azerbaijan cooperation in the Caspian Sea is of great significance, and an important document was signed by the two presidents in this area,” he added.

The Iranian president is in Baku on the second leg of his regional tour after visiting Turkmenistan.

During the visits, Rouhani met with his Turkmen and Azeri opposite numbers as well as other high ranking officials and signed several MoUs with the two countries.