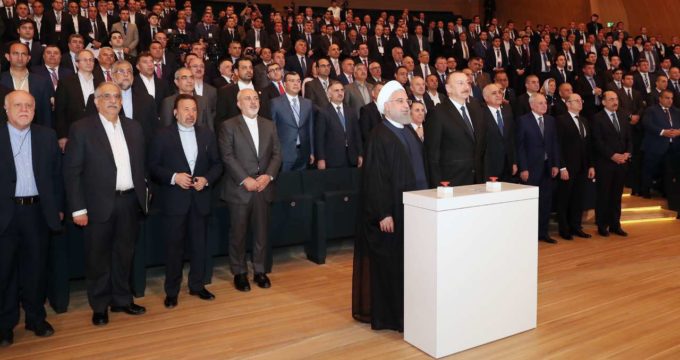 Tasnim – Iran and Azerbaijan on Thursday launched a joint car plant and a railroad connecting Iran’s northern city of Astara to its namesake in the Azerbaijan Republic.

The inauguration ceremony of the plant and the Astara-Astara railroad was held in Azerbaijan with Iranian President Hassan Rouhani and his Azeri counterpart, Ilham Aliyev, in attendance.

The joint car plant, which has a capacity to produce 10,000 to 15,000 cars per year, was opened in Azerbaijan’s Neftchala industrial park on Thursday.

The railroad connecting the two countries was also inaugurated via video conference.

The inauguration of the joint projects of Iran and Azerbaijan came a day after high-ranking officials of the two countries signed eight memorandums of understating (MoUs) to boost cooperation in different fields, including economy and culture.

Heading a delegation, Rouhani arrived in Baku on Wednesday at the official invitation of his Azeri counterpart.

Iran and Azerbaijan have ramped up efforts in recent years to forge closer partnership in various areas.

In February 2016, Aliyev paid an official visit to Tehran, during which the two sides signed eleven memorandums of understanding and agreements to promote mutual cooperation in a range of fields.