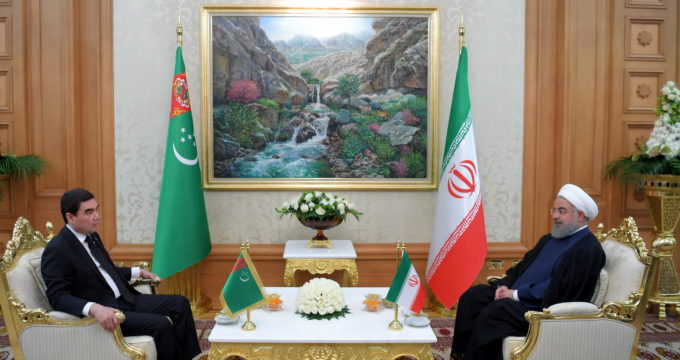 President Rouhani in Ashgabat to review issues of mutual interests

While in Ashgabat, Rouhani held separate meetings with several Turkmen officials including his Turkmen counterpart Gurbanguly Berdimuhamedow and took part in a joint meeting attended by the two countries high-ranking delegations where they discussed ways of boosting relations and cooperation between Tehran and Ashgabat.

Signing 13 agreements by the officials of the two countries and visiting the historic, religious city of Merv was in the itinerary of the Iranian president’s visit to Turkmenistan.

Talking to his Turkmen counterpart, President Rouhani referred to the opening of Sarakhs Bridge and its role in cementing relations, adding “with the elimination of obstacles related to transportation, cooperation between the two countries will further develop, paving the way for more cooperation between the private sectors, as well.”

For his part, Berdimuhamedow, voiced appreciation over Rouhani’s visit, stressing his country’s resolve to further develop ties with Iran in all fields of mutual interest.

In a meeting attended by the high-ranking delegations of Iran and Turkmenistan in Ashgabat, President Rouhani stressed importance of having friendly and brotherly ties with Turkmenistan.

On cooperation between the Islamic Republic of Iran and the Republic of Turkmenistan in different fields, especially energy, transit and transportation, Rouhani stated “beginning of the project of the third line of power transport from Iran to Turkmenistan, new cooperation in the field of oil and gas in Caspian Sea and providing loans for the development of transport between the two countries can be new steps in economic relations between the two countries.”

In a meantime, a joint statement was signed between Iran and Turkmenistan after President Rouhani and his Turkmen counterpart met in Ashgabat.

“The Iranian and Turkmen presidents have reiterated on the need to develop bilateral relations in the areas of mutual interest by taking into consideration the strategic level of mutual cooperation,” part of the joint statement said.

Eventually, Rouhani left the country for Azerbaijan on Wednesday (March 28) upon an official invitation from his Azerbaijani counterpart Ilham Aliyev.

Ashgabat, Hassan Rouhani, Iran-Turkmenistan ties March 28, 2018
President Rouhani arrives in Baku
Let’s focus on what brings us together, not what pulls us apart