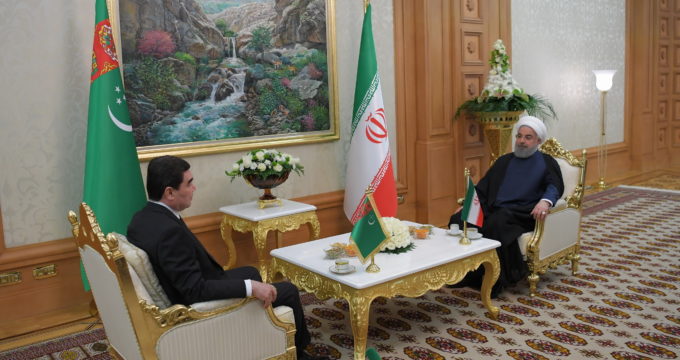 Iran cements ties with neighbors ahead of Trump D-day

Press TV – Iran and Turkmenistan appear to have put a snowballing gas debt dispute behind them following President Hassan Rouhani’s visit which culminated in the signing of 13 documents for broadening of relations.

The row is over Turkmenistan’s claims that Iran owes it around $1.5 billion for gas the Central Asian nation delivered in 2007, but Tehran rejects it and wants to resolve the disagreement through international arbitration.

Iran has imported gas from Turkmenistan since 1997 for distribution in its northern provinces, especially during the winter, because its own gas fields are mostly located afar in the south.

Rouhani began his first visit abroad in the new Iranian year to Ashgabat where the two sides held “very constructive and valuable” talks and made “good decisions” in line with the interests of the two nations.

The agreements signed in a meeting with his Turkmen counterpart Gurbanguly Berdimuhamedow on Tuesday covered a whole gamut of political, cultural, trade, industrial, agricultural, sports and academic fields, but energy, transit and transportation will constitute the backbone of their cooperation.

The Turkmen leader said strengthening friendship with Iran was highly important to his country and expressed hope that the agreements signed would provide the two nations with significant benefits.

Last month, Berdimuhamedow and other regional leaders launched construction work on the Afghan section of an $8 billion natural gas pipeline that will link Turkmenistan through Afghanistan to Pakistan and India.

The TAPI project is supported by the United States and Saudi Arabia which are strongly opposed to a similar plan from Iran despite having to run for hundreds of kilometers (miles) through areas of southern Afghanistan largely controlled by Taliban insurgents.

Ashgabat is also interested in sending its gas to Turkey, Iraq, Azerbaijan and Armenia through swap deals with Tehran.

In November, Managing Director of National Iranian Gas Company Hamidreza Araqi was quoted by ISNA news agency as saying that the Islamic Republic was open to swap the Turkmen gas with Azerbaijan and Armenia. Turkmenistan, he said, was already sending near 6 million cubic meters of its gas to Azerbaijan through Iran.

Ashgabat also sees Armenia as a potential energy bridge to Europe. Rouhani on Tuesday said the two governments have decided to work to remove obstacles to closer transit collaboration.

“Thanks to their location, Iran and Turkmenistan could act as gateways for high seas and Central Asia and facilitate transit of goods in the region,” he said.

“With transit-related problems solved, the ground will be prepared for closer cooperation between the two countries and their private sectors,” Rouhani said.

Rouhani and Berdymukhamedov also discussed options for the transit of electricity, a lynchpin component of Turkmenistan’s efforts to diversify away from gas exports.

The Iranian president traveled later Wednesday to Azerbaijan where the two sides were about to sign a major railway agreement.

On Tuesday, a section of the line – part of the North-South Transport Corridor (NSTC) – was launched linking the Iranian city of Astara to the Azerbaijani city of the same name.

Iran’s Deputy Minister of Roads and Urban Development Khayrollah Khademi called it a “historic and memorable day in rail links” between the two neighbors.

“With this opening in Astara today, the North-South Transport Corridor was activated, realizing transportation and transit of goods and passengers from northern Europe, Russia and Azerbaijan via Iran to the Persian Gulf and southeast Asian nations, especially India, Pakistan and Afghanistan,” he said.

Khademi said Rouhani and his Azerbaijani counterpart Ilham Aliyev were to discuss the implementation of the section between Astara and Rasht in Iran and financial agreements related to the project.

Iran is currently building another stretch for a length of 164 kilometers between Rasht and Qazvin where the line will be hooked up with the national railway network.

Rouhani’s visit is part of Tehran’s evolving policy to reroute trade to the places which are less susceptible to outside arm-twisting as the country is facing a D-day set by US President Donald Trump to possibly abandon an international nuclear agreement with Iran.

Last month, the Iranian president visited India to fast-track joint investment plans and review a whole gamut of relations at a time of new geopolitical realities.

The two countries have a mutual interest in developing relations. While Iran seeks to use foreign investment as a buffer against fresh US pressures and to revive its economy, India hopes to utilize Iran’s transit potentials to embolden its connectivity footprints.