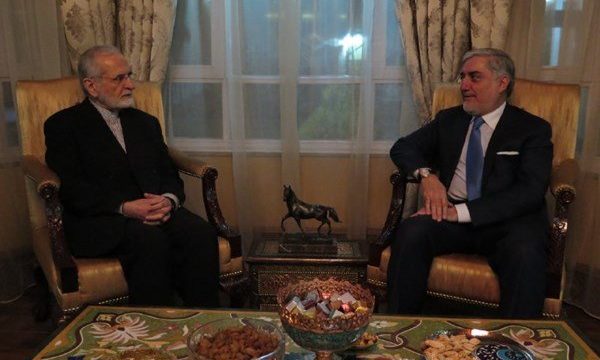 Seyyed Kamal Kharrazi, the Head of Iran’s Strategic Council on Foreign Relations made the remarks in a meeting with Abdullah Abdullah, Chief Executive of the Islamic Republic of Afghanistan, in Kabul.

In the meeting, the two sides exchanged their views on bilateral relations and the opportunities and threats ahead of Afghanistan.

Abdullah Abdullah, for his part, stated that the Afghan government is trying to reach an agreement with Taliban through negotiation, although there is a difficult path ahead.

Chief Executive of the Islamic Republic of Afghanistan added that in addition to the Taliban problem, there is the ISIL problem in Afghanistan.

Kharrazi, in turn, supported the Afghan government’s talks with the Taliban, adding “the main goal of the Islamic Republic of Iran is peace, stability and security in Afghanistan, and Iran always supports the governments in place.”

Referring to two parliamentary and presidential elections in Afghanistan over the next two years, the head of Iran’s Strategic Council on Foreign Relations expressed hope that the two elections would be carried out peacefully and Afghan people can determine their future without foreign intervention.

Kharrazi added that an independent government can overcome the Afghanistan’s problems through people’s votes.

During his trip to Afghanistan, Head of Iran’s Strategic Council on Foreign Relations held meetings with different Afghan high-ranking officials including the Afghan president and the foreign minister.