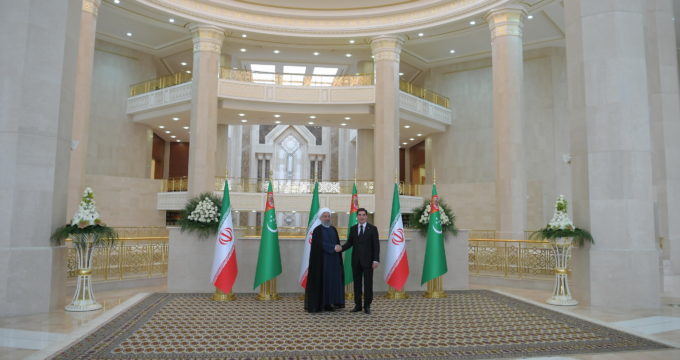 Why Rouhani’s trip to Caspian states is a big deal

Press TV – President Hassan Rouhani has begun the new Iranian year with a trip to neighboring Turkmenistan and Azerbaijan, signaling Tehran’s focus on connectivity as the cornerstone of reviving links with traditional trade partners.

Iran’s plans are in synergy with development strategies of the surrounding countries calibrating to a major change which has started in trade routes in the wake of China’s massive project to build a modern-day “Silk Road” at a cost of $1 trillion.

Iran seeks to revive its traditional position as the transport hub in the heart of Eurasia and a vital link between the East and the West.

The strategy has found added momentum after a landmark nuclear deal in 2015 failed to put an end to years of estrangement between the Islamic Republic and the West. Tehran is now trying to reroute trade to the places which are less susceptible to outside arm-twisting.

The country is buoyed up by China’s heavy engagement, especially in Iran’s evolving railway sector, and their plan to raise bilateral trade to $600 billion per year within the next decade.

Last February, Tehran received the first freight train from China in a dry run of Beijing’s spectacular “Belt and Road” initiative, followed by the Chinese Export-Import Bank’s inking of a $1.5 billion deal to electrify the rail line from Tehran to Mashhad and its promise to invest $9 billion in over two dozen other projects.

The 926-kilometer railway between Tehran and Mashhad is part of the 3,200-kilometer new Silk Road which goes all the way to Kazakhstan, Kyrgyzstan, Uzbekistan, Turkmenistan and Urumqi in China.

Other countries of the region have drawn up their own development strategies.

India and Russia are heavily investing in the North-South Transport Corridor (NSTC), which is about to connect the subcontinent to the Middle East, the Caucasus, Central Asia and Europe and significantly reduce transportation costs and travel time.

The NSTC concept was formalized by India, Iran and Russia in 2000 but Western trade sanctions on both Russia and Iran in recent years have provided a new impetus to put steam on the project.

Another parallel program is Nurly Zhol designed to turn Kazakhstan into a key Eurasian transport and logistics hub. The $9 billion economic stimulus plan envisages development and modernization of roads, railways and ports.

India and Japan are heralding the Asia-Africa Growth Corridor as a way to promote development, connectivity, and cooperation between Africa and Asia as part of a liberal and value-based order.

Azerbaijan and Turkmenistan are building up their own transportation economy to diversify away from reliance on oil and gas, which overlaps in Iran as do all the other development strategies.

As President Rouhani began his visit to the two countries on Tuesday, he said there existed “enormous capacities for an all-embracing development of relations” among Tehran, Baku and Ashgabat which would be on the agenda of talks.

“One of the goals of the (Iranian) administration is proximity with the neighboring countries. In this trip, besides developing traditional trade and economic relations with Turkmenistan and Azerbaijan, the issue of the regional transit and connecting southern waters to the Central Asian region and the Caucasus is important,” he told reporters.

During his visit to Baku, Iranian and Azerbaijani officials will sign the document for the construction of the Rasht-Astara railway which will connect Iran to the Caucasus, Russia and Europe, the president said.

The two countries will also sign a cooperation agreement on oil and gas in the Caspian Sea, “which is an important document for development of economic relations between Tehran and Baku,” Rouhani added.

The president is accompanied by a number of traders and representatives of the private sector, who are about to discuss cooperation in industry, agriculture, health and tourism.

Most of Iran’s existing oil and gas reserves are located in its southeast and offshore in the Persian Gulf, which have distracted the country’s attention from the Caspian deposits.

Iran started drilling the first exploratory oil well in its territorial waters of the Caspian Sea in 2010, with officials saying then that talks were underway with the Chinese National Petroleum Company (CNPC) and India’s Oil and Natural Gas Corp (ONGC) to develop reserves in the landlocked waters.

The Caspian basin is expected to be one of the world’s hottest spots for growth in oil and gas production over the next few decades.

Russia dominates the energy trade in the region where most of the existing shipping and pipeline infrastructure sends Caspian energy west to Europe. However, Moscow’s escalating tensions with the West and the rising Chinese market bear the pangs of a new conception which may shift it to the east.

Kazakhstan has already an operational oil pipeline running from the Caspian shore to Xinjiang in China. If Russia joins it, Iran is very likely to come onboard especially given that its oil and gas sector is turning to energy-thirsty Asia for money, expertise and technology to sidestep US sanctions and pressure.