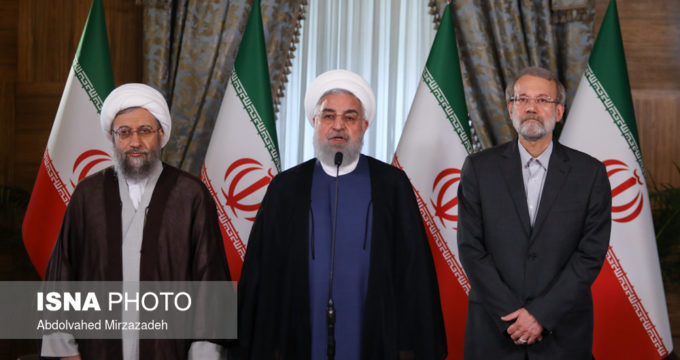 IRNA – Three branches of power in Iran have all described as an urgent need preserving unity and internal coherence in the country, Iranian President Hassan Rouhani said on Monday.

Today more than any other time, unity and internal coherence are important for Iran, President Rouhani told reporters at a press briefing held at the end of a meeting attended by the heads of three branches of Executive, Legislative and Judicial power in the country.

Elaborating on the meeting, the president said the discussions revolved around international and internal issues, including the livelihood of the people, workers and villagers.

President Rouhani said the three heads of branches of power stressed the need for more attention to be paid to the economic condition of the people.

Boosting employment and fighting poverty are top on the agenda for the year ahead, the president said, referring to the new Iranian calendar year started on March 21.

President Rouhani also touched on the Supreme Leader’s Norouz message and the designation of the New Year as year of ‘Support for Iranian Products’.

Helping domestic producers, improving quality of the Iranian products, proper marketing for the Iranian commodities in the world and region, controlling imports and countering smuggling of goods all can help us achieve the country’s goal for the New Year, Rouhani said.

‘During today’s meeting we also focused on the regional issues and reviewed relations with countries in the region in terms of economic, security and political perspectives,’ he added.

President Rouhani also referred to his upcoming visits to the two neighboring countries of Azerbaijan Republic and Turkmenistan on March 27, saying the visits are aimed at strengthening regional relations and finding ways to promote regional security and stability.

In the near future, he said, a meeting will be held in Turkey with participation of Iran, Russia and the host country as the three peace guarantors in Syria, he said.

The meeting will be on the future of Syria and security in country, Rouhani said, expressing hope for the trilateral meeting in Turkey to be an effective step towards establishing peace in Syria.