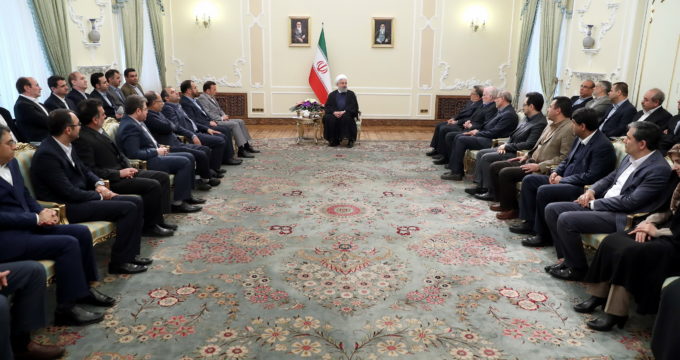 MNA – In his meeting with chief executive officials, managers and directors of organizations, Iranian President Hassan Rouhani called on all responsible officials to take effective steps in line with eliminating poverty in the country before termination of the 12th government dubbed ‘hope and prudence’.

Speaking in the first business day of the current Iranian calendar year in 1397 (started March 21, 2018), he called on all executive officials of the country to make their utmost efforts and seize any chance for rendering quality services to the noble people of this country.

He wished evermore success, goodness and health for all Iranian people in the new year and said, “giant steps were taken in the past Iranian calendar year in 1396 (ended March 21, 2018) in various national and international levels.”

Rouhani expounded on some parts of these achievements and said, “controlling and curbing single-digit inflation rare in the country, making effort to generate employment opportunities and paving suitable ways for investment and promoting export of nonoil commodities along with creating proper economic and business ties with the outside world are of the most important steps taken by the 11th and 12th governments.”

Banking system of the country has a double responsibility to win public trust and confidence and economic prosperity, Rouhani maintained.

Elsewhere in his remarks, he pointed to the government’s effort taken to support low-income and poor families in the country and added, “for the first time after the glorious victory anniversary of the Islamic Revolution, living standards of all low-income families was upgraded, so that we will take more effective steps in line with uprooting poverty in this land and territory.”

In the end, President Rouhani emphasized on creating a suitable way for attracting domestic and foreign investment and added, “creating boom in business environment is one of the most effective steps that should be followed up strictly for removal of unemployment problem.”