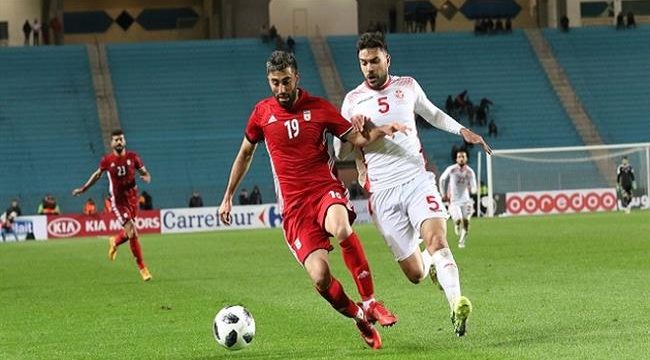 Press TV- The Iran men’s national football team, domestically known as Team Melli, has fallen to a narrow defeat against Tunisia in a friendly fixture as it is gearing up for the 2018 Fédération Internationale de Football Association (FIFA) World Cup.

On Friday evening, Team Melli put its abilities to the test before starting own campaign at the world championship of association football, but failed to overcome the Eagles of Carthage at the multi-purpose Stade Olympique de Radès stadium in Rades, located about 10 kilometers southeast of the capital Tunis.

The Tunisian squad started the match in a better fashion, but Iranian football players could establish themselves and brought the match under control as the time passed.

The Iranians then moved forward and mounted a series of attacks on the hosts’ goal in search of a goal.

The visitors felt they should have had a spot kick when 27-year-old striker Karim Ansarifard was brought down in the area in the 15th minute, but the referee surprisingly did not agree.

Five minutes later, Iranian defender Ramin Rezaeian sent the ball to teammate Ansarifard, who sprang into the air and struck a header. But Tunisia’s goalkeeper pulled off a fine save.

Both teams failed to score a goal in the first half, and went into the cloakrooms tied at nil.

In the 71st minute, the Tunisia football team could open the scoring, when Iranian defender Milad Mohammadi made a costly mistake.

Iran’s best chance to equalize came in the 88th minute, when Mehdi Torabi could not beat the hosts’ custodian one-on-one.

The Iran men’s national football team is scheduled to take on Algeria in an exhibition game on March 27.