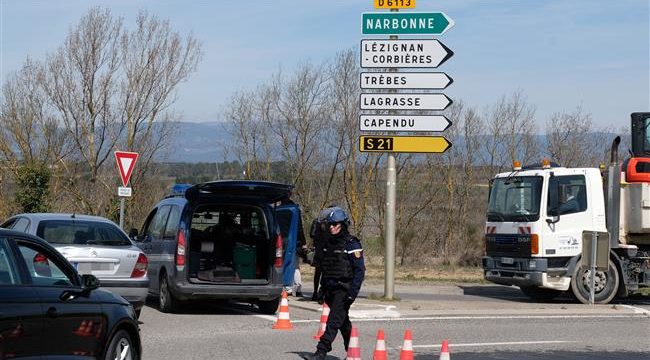 At least three killed in France hostage-taking by Daesh

Press TV- At least three people have been killed after a gunman claiming allegiance to the Daesh terrorist group fired shots and took hostages in southern France.

An Interior Ministry source said two people had died at the hostage-taking incident at a supermarket in Trebes on Friday.

“It is a provisional assessment as it could unfortunately get worse. Three people are wounded, including one of them seriously,” the source said.

The incident in Trebes took place after the man “entered the Super U supermarket at around 11.15 a.m. and shots were heard,” a security source told AFP on condition of anonymity.

Later, a police union official said the attacker had also killed one person with a bullet in the head in the nearby town of Carcassonne before the hostage-taking.

He added that one police officer has been injured in the attack.

According to BFM TV, the supermarket attacker was shot down after French police launched a raid.

The hostage-taker in Trebes had asked for the release of Paris November 2015 attacker Salah Abdeslam, BFM TV said, citing an anonymous source.

If the link to Daesh is confirmed, the attack would be the first major incident since the election of Macron in May last year.

The Friday incidents occurred at a time when France is still on high alert after a string of attacks since 2015.

On January 7, 2015, two Takfiri militants attacked Charlie Hebdo magazine, killing 12 people, including top editorial staff. The attack was largely believed to have been launched over the weekly’s insulting cartoons of Prophet Mohammad (PBUH).

A day after the magazine attack, another militant killed a policewoman. On January 9, 2015, he also took people hostage at the HyperCacher supermarket and killed four of them before being shot dead by police.

On the same day, the escaped Charlie Hebdo gunmen were killed in a printing plant in Dammartin-en-Goele north of Paris.

France also suffered major attacks in Paris in November 2015 when Daesh launched a series of violent attacks, targeting cafes and a concert hall in Paris, and massacring a total of 130 people.

In July 2016, a truck driver deliberately plowed through a Bastille Day crowd in Nice, killing 84 people and wounding 200 others. An 85th victim of the attack, claimed by Daesh, died later in hospital.

France lifted a state of emergency put in place just after the Paris attacks in October last year, but soldiers continue to patrol major tourist sites and transport hubs under an anti-terror mission.