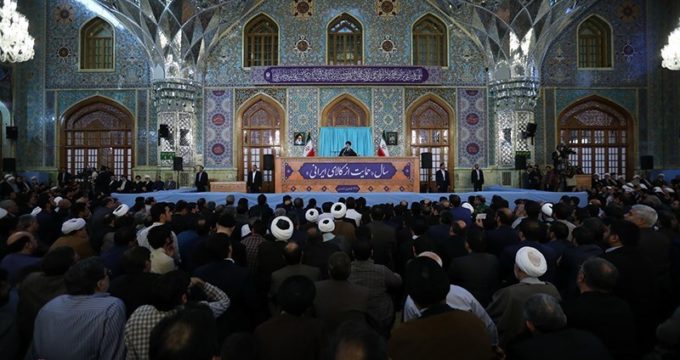 The Supreme Leader made the remarks in an address to large group of people in the holy city of Mashad (Razavi Khorassan Province) on Wednesday.

“During the year gone by, the Islamic Republic managed to raise the flag representing the Iranian nation’s dignity and power in the region, which played a key role in defeating takfiri groups, bringing about security,” Supreme Leader said.

He went on to say that “The US does not seek to create security in the region. They were in Afghanistan for 14 years. What on earth did they do there? Some say they didn’t want to bring about security, others say they wanted to but failed.”

“The US’ plot was to create and empower takfiri groups like ISIS, meant to send Muslim countries into a state of internal wars so that nations would forget about the Zionist regime. We managed to nullify that plot,” he said, adding that of issues regarding the region [Middle East], the US will, undoubtedly, fail to achieve its goals, and we will accomplish our intentions.

“Our involvement in certain parts of the region was upon the request of those nations, we have taken measures based on logical and wise motives, rather than based on emotions. We did so without interfering with their domestic affairs or ordering them on what to do or not to do,” he noted.