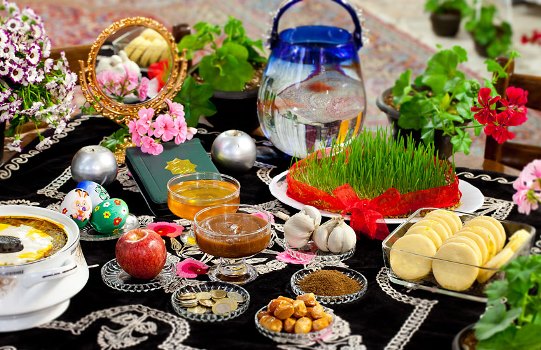 Nowruz: An ode to spring

Press TV- Nowruz (New Day), the name of the Iranian New Year, is a traditional festival that marks the beginning of spring in the Northern Hemisphere.

A 3,000-year-old Iranian tradition for people of all faiths, Nowruz is celebrated by the world’s Persian-speaking community and other ethno-linguistic groups across Western Asia, Central Asia, the Caucasus, the Black Sea Basin, the Balkans and even parts of Europe.

Kazakhstan, Kyrgyzstan, Turkmenistan, Uzbekistan, Afghanistan, India, Albania, Azerbaijan, Georgia, and Kosovo are some of the countries, where the tradition is observed.

In countries, where Persian is the mother tongue, like in Tajikistan, the occasion is honored as a public holiday.

The occasion, marking the vernal equinox, falls in March every year.

In 2010, the United Nations General Assembly recognized the International Day of Nowruz, describing it as a spring festival of Iranian origin, which has been celebrated for more than three millennia.

Nowruz was officially registered on the UNESCO List of the Intangible Cultural Heritage of Humanity in 2009.

It is one of the world’s most long-established celebrations, running back more than 30 centuries. It has its roots in ancient Persia, and is thus still celebrated mostly across the Persian Plateau, especially Iran, which holds the largest concentration of the world’s Persians.

Some credit Babylonians with establishing Nowruz, while others hold that Zarathustra was the one who pioneered the jubilations.

Nowruz is extensively addressed across the Persian literature. For instance, peerless Persian poet and author of Shahnameh (Book of Kings), Ferdowsi, chronicles its creation with an allegorical incident, when mythological King Jamshid sat on his throne and waited until sun rays struck his crown before announcing Nowruz.

Cyrus the Great, who founded the first Persian Empire, called the celebration a national holiday, and ordered that domestic spaces and public places be tidied up as a means of paying tribute to the spring.

Darius I, the fourth monarch of the Achaemenid Empire, founded by Cyrus, would celebrate Nowruz in Persepolis.

Upon embracing Islam, Persia would still celebrate Nowruz. The religion, especially the Shia faith, regards it as an auspicious occasion.

In the weeks running up to Nowruz, Most Iranians do spring-cleaning in harmony with the rebirth of the nature.

Traveling through the cities at the time, one is more than likely to see people washing the windows of their houses or hanging up their washed-up carpets on rooftops.

They spread out the proverbial Haft-Seen table, an arrangement of seven items alliteratively beginning with the letter “Seen” in the Persian Alphabet, which sounds similar to “S.”

These symbolic items represent health, prosperity, longevity, reproduction and happiness for the family members throughout the year.

A fishbowl containing red goldfish is also usually added to the arrangement.

On the last Thursday of the Iranian year, people also visit the graves of their loved ones. They usually take flowers to the cemetery, wash the gravestones and pray for the departed.

In Iran, the arrival of the New Year is announced by the firing of cannonballs.

A fortnight-long holiday span follows the inauguration of the New Year, when all schools and universities are closed for its entire length and public servants usually take a week off.

On the first day, family members typically gather around the Haft Seen table, awaiting the exact moment of the spring’s arrival based on the solar calendar.

After the turn of the year, they begin exchanging gifts and money to congratulate each other.

Iranians dedicate the first few days of the year to visiting parents and elders. They also pay short house visits to other family members, friends and neighbors.

The holidays culminate in Sizdah Bedar, the 13th day of the New Year, a day of family outings.

People take to parks and other green spaces countrywide, usually eat al fresco, and dispose of the Haft Seen’s Sabzeh, a patch of grown sprouts kept as an item on the Haft-Seen.