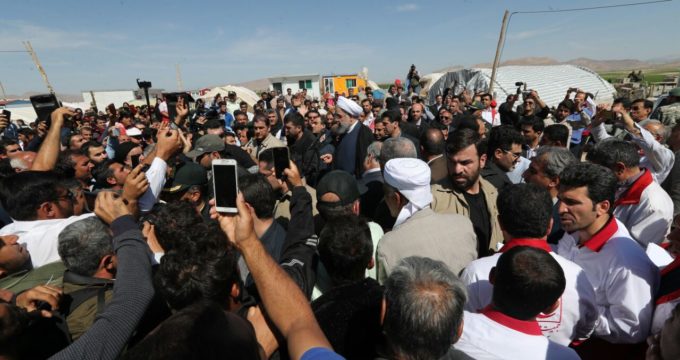 Gov’t to stand by quake-hit people until all people’s problems solved, needs met

president.ir- The President visited the earthquake-hit areas of Kermanshah province on Tuesday, and visited Mirmiroo village and met with people in cordial atmosphere.

During the visit, Dr Hassan Rouhani spoke with the people of Mirmiroo village and was briefed on the reconstruction of the areas hit by the earthquake.

The president also urged the relevant authorities to increase their efforts to help people in earthquake-hit areas and to supply their items during Nowruz.

Referring to the positive trend of rebuilding earthquake-hit areas, President Rouhani addressed the people and provincial authorities, saying: “We must work hard to ensure that all damaged areas of this region are completely reconstructed and delivered to the people by the end of the summer”.

He also went on to stress the urgency that the authorities should address the needs and solve problems of people in earthquake-hit areas, adding: “This year was a year in which the people of these areas encountered many hardships and suffering, and we hope that next year will be a great year for everyone”.

Expressing satisfaction with being the guest of the brave, warmhearted people of Kermanshah, he stressed: “The government will stand by the quake-hit people to solve all their problems and needs”.