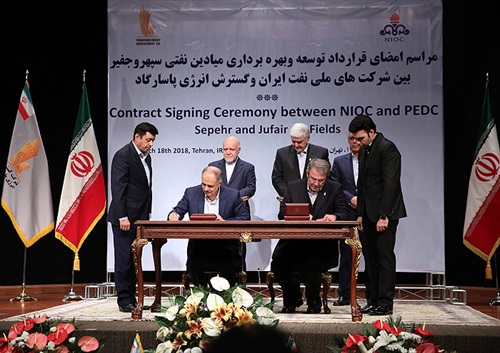 SHANA –  The National Iranian Oil Company (NIOC) and Pasargad Energy Development Company (PEDC) have signed a contract for the integrated development of Sepehr and Jofeir Fields with an estimated CAPEX of 2.4 billion dollars.

The CEOs of NIOC CEO (Ali Kardor) and PEDC (Mehdi Mir Mo’ezi) signed the contract here in Tehran on Sunday, only three days before the New Year in Iran.

The deal is aimed at a maximum production of 110,000 b/d with an accumulated output of 512 million barrels from the two fields over a period of 20 years.

This is the first time that NIOC has entrusted development of an upstream project in Iran’s oil industry to a domestic E&P company as the project’s main developer.

Sepehr and Jofeir fields were discovered by digging the first well No. 1 Jofeir, Khuzestan Province, southwestern Iran, in 1976. These fields are situated in the northeastern part of Abadan plain, 60 km southwest of the oil-rich city of Ahvaz.

The studies carried out by the relevant NIOC departments and its subsidiaries over the fields proved that given the structure of their reservoirs, they can be developed via an integrated development project in order to maximize their profitability.

Iran has envisaged 31 billion dollars in revenues from developing the two fields over the 20 years, NIOC Deputy Head for Engineering and Development Affairs Gholamreza Manouchehri told the signing ceremony of the contract on Sunday.

“This is while the developer will gain 970 million dollars in the project,” he added.

Considering the policies of the Iranian Ministry of Petroleum and the National Iranian Oil Company (NIOC), and introduction of the newly-developed model of oil contracts (IPC), and approval and designation of the list of qualified Iranian exploration and production (E&P) companies in order to tap the potentialities of these companies and enhance their capabilities as E&P companies, NIOC has decided to assign development and operation of some of the country’s oil and gas fields, including Sepehr and Jofeir fields, to capable Iranian E&P companies as the main contractors (operators).

Accordingly, a memorandum of understanding (MoU) was signed on February 1 2017 between NIOC and Pasargad Energy Development Company for the latter to study Sepehr, Jofeir and Susangerd fields.

After submission of the results of the studies and presentation of the technical and financial model of the fields, and carrying out assessments of various dimensions of the project, NIOC endorsed the proposal of Pasargad Energy Development Company for developing Sepehr and Jofeir fields.

Immediately, intensive contractual negotiations started between NIOC and PEDC on the basis of the new oil contracts (IPC).

The CAPEX calculated for the development of Sepehr and Jofeir fields is estimated at $2,426m. Indirect costs are estimated at $412m.

The main jobs envisaged to be carried out under this agreement include provision of an optimized scenario for developing the two fields, workover of the existing wells, installation of downhole pumps, drilling vertical and horizontal wells in Fahlian and Ilam reservoir layers (a total of 126 wells) and four wastewater wells, fractions operations, injection of water and gas for improved recovery rate of these fields and building oil collection and transmission pipelines and electricity transmission lines.

Once operational, the project, while increasing the country’s crude oil production capacity in the oil-rich West Karoon region, will generate jobs on a large scale in the southwestern province of Khuzestan and create a good market, especially by creating and workshops for the repair of ESP pumps and other equipment.

By signing the contract, Pasargad Energy Development Company is expected to apply proper management in the project and collaborate with international E&P companies and manufacturers to absorb the capital and technologies needed in enhanced recovery, modern drilling techniques as well as other relevant sectors and made every effort for implementation of the savvy in the project.