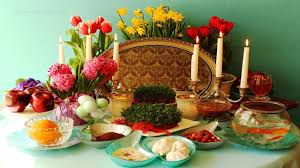 Iran Daily – Each year, millions of Iranians celebrate one of the most significant holidays Norouz, Persian New Year, in Iran and throughout the world.

In Iran, the New Year begins with the advent of spring, and most everyone observe it by celebrating a season of new life, and wishing for good luck in the year ahead.

Meaning of Norouz
In the Persian language, Norouz is taken from ‘no’ (new) and ‘rouz’ (day). It means ‘new day’, symbolizing new life, and new beginnings. Every year, Norouz coincides with the start of spring and traditionally celebrates the rebirth of nature. It also coincides with the spring equinox.

In recognition of the importance of this ancient rite, Norouz was inscribed on the UNESCO Representative List of the Intangible Cultural Heritage of Humanity in 2009. UN General Assembly recognized March 21 as the International Day of Norouz in 2010. More precisely, however, Norouz marks the day of the vernal equinox in the Northern Hemisphere, which can occur anytime between March 19-22, depending on the year as well as one’s location. In 2016 it was added to the UNESCO List of the Intangible Cultural Heritage of Humanity. Canada also passed a law recognizing March 21 as Norouz Day.

UNESCO has registered Norouz celebrations as shared practices of 12 countries. Azerbaijan, India, Iran, Kyrgyzstan, Pakistan, Turkey and Uzbekistan were listed by the UN agency in 2009 as countries where Norouz is celebrated. A new proposal was drawn up last year to include five more countries namely Afghanistan, Iraq, Kazakhstan, Tajikistan and Turkmenistan.

Renowned Muslim scholars, such as the Persian Abu Rayhan Muhammad ibn Ahmad al-Biruni, known as Biruni (973-1048), Mahmud ibn Hussayn ibn Muhammed al-Kashgari (1005-1102), and Omar Khayyam (1048-1131) were among the many intellectuals who studied the date of Norouz.

Historical background
According to UNESCO, Norouz is a rite dating back to at least the 6th century BCE, marking the New Year and ushering in the spring.

Norouz is celebrated by peoples of many religions and cultures across this vast region. Some of the festival’s earliest origins lie in Zoroastrianism, marking one of the holiest days in the ancient Zoroastrian calendar. The return of the spring was seen to have great spiritual significance, symbolizing the triumph of good over evil and joy over sorrow. In particular, the ‘Spirit of Noon’, known as ‘Rapithwina’, who was considered to be driven underground by the ‘Spirit of Winter’ during the cold months, was welcomed back with celebrations at noon on the day of Norouz according to Zoroastrian tradition.

Norouz is also associated with a great variety of local traditions, including the legend of Jamshid, a king in Persian mythology. To this day in Iran, Norouz celebrations are sometimes referred to as Norouz-e Jamshidi. According to the myth, Jamshid was carried through the air in a chariot, a feat that so amazed his subjects that they established a festival on that day. Similar mythological narratives exist in Indian and Turkish traditions, while the legend of Amoo Norouz is popular in the countries of Central Asia.

Norouz celebrations in other countries
Norouz, the vernal spring equinox has been celebrated by people of Iran and Mesopotamia since antiquity. Although continuously celebrated in Iran for at least 3,000 years, many countries along the Silk Road including Afghanistan, Albania, Azerbaijan, the Former Yugoslav Republic of Macedonia, Georgia, India, Iraq, Kyrgyzstan, Kazakhstan, Pakistan, Tajikistan, Turkey, Turkmenistan and Uzbekistan, China, the Caucuses and Egypt also celebrate this event. Crimean Tatars in Ukraine also commemorate it.

Norouz celebrations depend on the country. But it is not a one-day affair. In Iran, Norouz ceremonies start with a set of rituals of preparing for the New Year and the marking the end of the cold season. It starts with people carrying out a thorough cleaning of their homes.

On the day of Norouz, there is much feasting, visiting relatives and friends, and exchanging gifts. A wide range of cultural performances and traditions also take place. Children are often given small toys, and traditionally play with colorfully painted eggs. Families and within communities share a symbolic meal, often of cooked rice and vegetables combined with many local ingredients. In Kyrgyzstan, this meal is a public ceremony, with designated areas set aside in towns for the preparation of Norouz Kedje or Chon Kedje — a type of soup made from bull’s meat.

Norouz is also the occasion for traditional cultural activities, combining common practices with local customs. Poetry is a popular feature of Norouz celebrations, with ‘Norouzi poems’ being written, published and recited around the time of the festival. Music is also very important, and many of the countries that celebrate Norouz have their own traditional folk songs specifically for the festival.

One example is the well-known Afghan song ‘Molla Mammad Jaan’, which is said to have originated in the city of Mazar-i Sharif but is also sung in Iran and Tajikistan. In Uzbekistan, Norouz songs are performed by traditional singers and story tellers, such as the baxshi, shoirs and dostonchi. Similarly, in Kyrgyzstan, competitions take place between Akayns, epic story tellers or bards who improvise tales about Norouz.

Open air festivities such as the game of Kopkari, wrestling and horse racing often take place to celebrate Norouz in Uzbekistan, and similarly, in Kyrgyzstan, traditional horsemanship is displayed as part of the festivities, with communities coming together to enjoy horse racing, Kyz Kuumay (a race in which men chase women on horseback), Enish (wrestling on horseback), and Jamby Atuu (shooting from horseback).

Other Norouz traditions include local street performances, tightrope walking, called Band Bāzī, in Iran, and the sport of Buz Kashī, in which horse-riders compete for an object representing the head of a calf, in Afghanistan.

Chaharshanbe Suri
The last Tuesday of the year is marked as Chaharshanbe Suri or bonfire night. People jump over a trail of bonfires and the youngsters make a lot of noise with firecrackers.

Chaharshanbe Suri continues with a ritual later in the night, with people disguising themselves with long scarves and going door-to-door in the neighborhood. Iranian people do some trick or treating, literally called spoon-banging, where youngsters in disguises visit neighbors and receive snacks.

By the light of the bonfires they have lit, they run through the streets banging on pots and pans with spoons in a ceremony called Qashoq-Zani to beat out the last unlucky Wednesday of the year, while they knock on doors to ask for treats. Indeed, Halloween is a Celtic variation of this night.

This is while in Azerbaijan, this practice is carried out over the four Wednesdays preceding the celebrations. And in Kyrgyzstan, all vessels in the house are to be filled on Norouz Eve, in the hope that this will bring abundance in the New Year and keep away misfortune.

Respect for ancestors
The traditional rituals continue on the last Thursday of the year with many families remembering their dead relatives with visitors bringing candles and offerings to remember the dead. Norouz for Persian-speakers is a time of deep respect for the ancestors. Two candles are commonly placed at the door to the house on Norouz Eve in Kazakhstan. In Azerbaijan, the dead are commemorated on the second day of Norouz, known as the ‘Day of Fathers’.

Haji Firouz
He is a fictional character in Iranian folklore who appears at the beginning of Norouz. His face is covered in soot and he is clad in bright red clothes and a felt hat. He entertains passers-by by singing traditional songs and dancing and playing his tambourine for a few coins. He rarely knocks on a door but begins his performance as soon as the door is opened.

The celebrations culminate with the countdown to the New Year, with families gathering around what is known as the Haft seen table. In line with the literal meaning of its name — ‘haft’ refers to the number seven, while ‘seen’ refers to the letter ‘S’ in Persian language.

Haft seen has a rather complex history, having evolved from Haft-Shin of the Kayanids dynasty era to Haft-Chin of the Achaemenids dynasty circa and to its current Haft seen since the writing of ‘Shahnameh’ (‘Book of the Kings’) — the epic poem book of the Persian kings by Ferdwosi of nearly 1,000 years ago.

In fact, the word Haft, meaning seven, denoting the seven days of ‘creations’ has remained the same throughout.

In addition, each of them has their own symbolism, as outlined by a teaching resource on Norouz published by Harvard University’s Center for Middle Eastern Studies:

Sumac (crushed spice of berries): For the sunrise and the spice of life
Senjed (sweet dry fruit of the lotus tree): For love and affection
Serkeh (vinegar): For patience and age
Seeb (apples): For health and beauty
Seer (garlic): For good health
Samanu (wheat pudding): For fertility and the sweetness of life
Sabzeh (sprouted wheat grass): For rebirth and renewal of nature
Apart from these seven items, there are also many other items that Iranians include in their Haft Seen table, such as painted eggs representing fertility and a mirror to signify reflection on the past year. While the origins of the Haft Seen table are still not well-documented, today the tradition of placing various symbolic items on a Sofra (a piece of cloth spread on the floor or table) during Norouz has its roots in Zoroastrianism — a Persian monotheistic religion that predated the Abrahamic faiths.

Sizdah Bedar
The rituals continue until the 13th day of the New Year. Iranians believe that it is a bad omen to stay at home and so they all go out for picnics or barbecues in parks. It probably had historical links to Zoroastrianism too.

The first 12 days of the year are very important, because they symbolize order in the world and in the lives of people. The 13th day marks the beginning of the return to ordinary daily life.

Sizdah Bedar is also believed to be a special day to ask for rain. In ancient Iran, every day had its own name, and belonged to a different ‘yazat’ (Zoroastrian deity). The 13th day of month of Farvardin denoted to the deity of rain, Tir, which is depicted as a horse. Sizdah Bedar is also a day for competitive games, involving horses were often chosen as a victory of a horse represented, the deity of rain.

A ritual performed at the end of the picnic day is to throw away the ‘Sabzeh’ from the Norouz’ Haft Seen table. The sabzeh is supposed to have collected all the sickness, pain and ill fate hiding on the path of the family throughout the coming year!