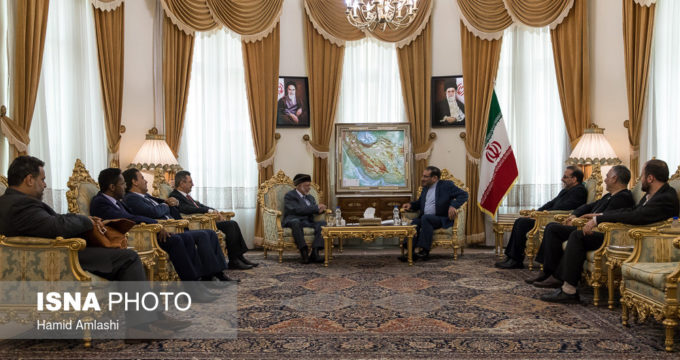 If Saudi Arabia faces any foreign aggression Iran would be first country to help: FM Zarif

Foreign Minister of Iran Mohammad Javad Zarif says if God forbid Saudi Arabia faces any foreign aggression or terrorism Iran will be the first country to come to its assistance.

Ayat. Jannati reelected as head of Assembly of Experts

Ayatollah Ahmad Jannati has been reelected as the chairman of Assembly of Experts for the second time in a row.

A prominent Iranian academic was given an 18-month jail sentence on Tuesday after giving an interview to German news organization Deutsche Welle, according to a press release from DW.

A member of the Tehran City Council confirmed on Wednesday that the mayor of Iran’s capital has resigned.

Supreme Leader of the Islamic Revolution Ayatollah Seyyed Ali Khamenei on Thursday received members of the Assembly of Experts.

Quadripartite meeting between the foreign ministers of Iran, Georgia, Turkey and Azerbaijan kicked off in this Azeri capital on Thursday.

Spokesperson for the US Special Operations Command William Orban claimed that eye-catching and dramatic reduction in confrontation between Iranian and American naval forces in the Persian Gulf is a sign of change in behavior of the Iranian side.

The Astana trilateral meeting with the attendance of Iran, Russia and Turkey urged in a joint statement establishing peace in Syria.

A regular meeting of the Joint Commission of the Joint Comprehensive Plan of Action (JCPOA) took place in Vienna on Friday during which all participants noted their continued adherence to JCPOA commitments.

A senior Iranian security official has called for dialogue between factions in Yemen to end the conflict there, Iranian state media reported on Saturday.

The reason behind the Turkish plane crash that happened in Iran late on Sunday is still unclear, said Turkey’s government spokesman.

Saudi Arabia’s cabinet has approved a national atomic energy policy, as the oil-rich kingdom tries to rationalize an ambitious plan to supposedly diversify its energy resources.

The Islamic Movement in Nigeria (IMN) said the government in Abuja plans to keep the movement’s Leader Sheikh Ibrahim Zakzaky and his wife Zeenah in detention until they die.

On March 18, almost 111 million Russian citizens will choose the country’s president for the next six years. Sputnik is keeping its eagle eyes trained on the process.

Iran’s state-run oil company has signed a $740 million agreement with a Russian-Iranian consortium to develop two oil fields near the Iraqi border.

Britain, France and Germany have proposed fresh EU sanctions on Iran over its ballistic missiles and its role in Syria’s war, according to a confidential document, in a bid to persuade Washington to preserve the 2015 nuclear deal with Tehran.

Iranian Minister of Petroleum Bijan Zangeneh said: “OPEC may choose to alter its output cut plan which I think would be unlikely.”

The foreign ministers of Turkey, Azerbaijan, Georgia and Iran signed an agreement on projects to create a transportation and transit corridor between the Indian Ocean and Europe in Baku on March 15.

Iran, Oman resolute to grow banking relations
Omani Foreign Minister Yusuf bin Alawi reassured the Central Bank of Iran (CBI) Governor Valiollah Seif that banking ties between Iran and Oman will grow as the officials of the two countries are determined to do so.
Society

Iranians are celebrating Chaharshanbe Soori, an ancient fire festival held on the eve of the last Wednesday of the Iranian calendar year.

Carlos Queiroz has been offered a contract extension to remain as head coach of Iran beyond the World Cup finals in Russia, a source close to the Portuguese coach has told to Reuters.

Iranian iconic artist Parviz Tanavoli is globally renowned as a leading figure in the history of modern art and the founder of Iran’s modern sculpture.

Building on a notably-successful and long-running first experience, Iran has launched iFilm2 television channel for Dari speakers within and outside the country’s borders.