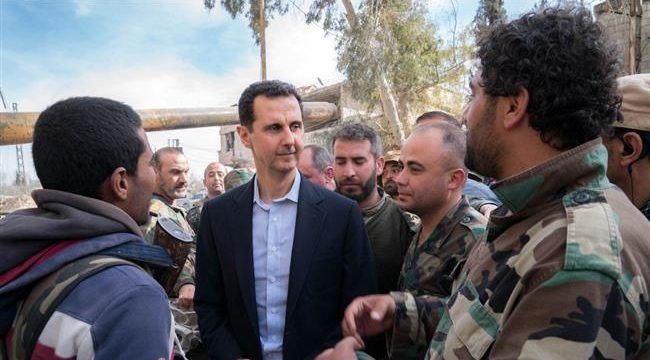 President Assad with the heroes of Syrian Arab Army at the frontlines in Eastern Ghouta, SANA reported.

Photos released by Syria’s official news agency showed President Assad surrounded by a crowd of men in military clothing, some perched on top of tanks.

The photographs were taken in a street lined with damaged building fronts with a couple of parked tanks.

Syria and Russia have cornered foreign-backed militants in the countryside as part of their campaign to liberate civilians holed up there and end militant attacks from the suburb on Damascus.

During their advances in the area, Syrian forces have uncovered workshops used to make chemical weapons. The Syrian military has also intercepted several arms and ammunition cargoes heading to Eastern Ghouta.

The report came shortly after Syria’s official news agency SANA reported that thousands of civilians, whom extremists were using as human shields to slow down the progress of government forces and their allied fighters from popular defense groups, have managed to leave Eastern Ghouta.