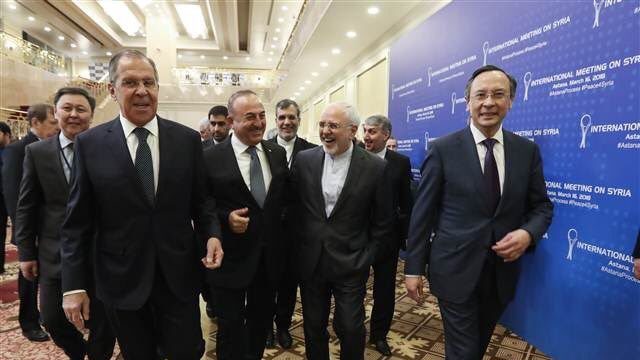 TASS– The Charter of the United Nations admits no ultimatums or sanctions initiated by the United States if there are alternative viewpoints, Russia’s Foreign Minister Sergey Lavrov said

Foreign ministers of Russia, Turkey and Iran have reiterated the necessity to assist in drafting the constitutional reform in Syria with the office of the United Nations Syria envoy Staffan de Mistura, Russia’s Foreign Minister Sergey Lavrov said in an interview with Kazakh President’s TV and radio broadcasting company released on the ministry’s website on Saturday

“Though De Mistura was missing due to illness, his deputy (Ramzi Ramzi) was here. We clearly reiterated that Russia, Iran and Turkey as three guarantors of the Astana process, as three initiators of the Syrian National Dialogue Congress in Sochi where all main groups of the Syrian society were unprecedentedly widely presented, will be actively helping De Mistura with drafting the constitutional reform,” he said.

According to Lavrov, blueprints for constitutional reform forced on Syria from abroad cannot be long-range. “It (constitution drafting by Syrians based on dialogue between government and opposition – TASS) will probably take slightly more time than writing the Syrian constitution somewhere abroad in Europe or across the pond and bringing it to Damascus. It is probably possible to force Syrian sides to follow this arrangement for several weeks or months, though it will not be long range,” he said. “In any case such geopolitical engineering will fail one day,” the minister added.

The Charter of the United Nations admits no ultimatums or sanctions initiated by the United States if there are alternative viewpoints, Russia’s Foreign Minister Sergey Lavrov said.

“When our American colleagues bring a resolution to the UN Security Council, while we suggest that it be negotiated since there are alternative points of view, we are accused of blocking the work, with ultimatums, sanctions in place, which is absolutely inadmissible from the viewpoint of the UN Charter,” he said.

According to Lavrov, the UN Charter is now “more relevant than ever,” and it is necessary to return to this document’s provisions for coping with today’s chaos.