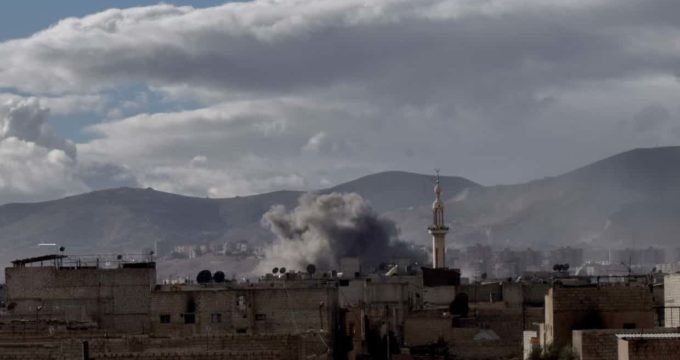 Press TV – Syrian government troops have regained the control of 70 percent of militant-held areas in Eastern Ghouta near the capital Damascus.

The army said in a statement on Friday that the forces had recaptured farmland, several villages and some towns.

“The Syrian army is continuing its operations in Eastern Ghouta and gained control of Jisreen town,” said a military media unit run by Lebanon’s Hezbollah resistance movement, which has been helping Syria’s army in its fight against terrorists.

The Syrian army, backed by Russian air cover, is conducting an operation against the terrorists holed up in the Damascus suburb and, at the same time, evacuating civilians through humanitarian corridors.

Eastern Ghouta fell to militants in 2012, months after Syria plunged into crisis, and has since served as a launch pad for fatal mortar attacks against residents and infrastructure in the capital.

The Syrian army has since mid-February been engaged in a push to liberate the region, which is controlled by a collection of militant groups, most notably the Takfiri terror groups of Jaish al-Islam and Jabhat Fateh al-Sham, commonly known as al-Nusra Front.

The army’s statement also urged people in Eastern Ghouta to come out of the remaining militant-held areas.

Syria’s ambassador to the UN said over 40,000 civilians left Eastern Ghouta on Thursday via a new security corridor opened by the government in the city of Hamouria.

Speaking at the UN Security Council on Friday, Bashar Ja’afari said following the liberation of Hamouria on Thursday the government was assisting the evacuation of civilians “who were taken as human shields by terrorist groups.”

He said the government and Syrian Red Crescent were coordinating to facilitate the safe evacuation of people from the enclave “to temporary shelters that are equipped with all the necessary equipment.”

Ja’afari also accused the UN and other governments of doing nothing to relieve the suffering “of tens of thousands of people who have tried to flee terrorism.”