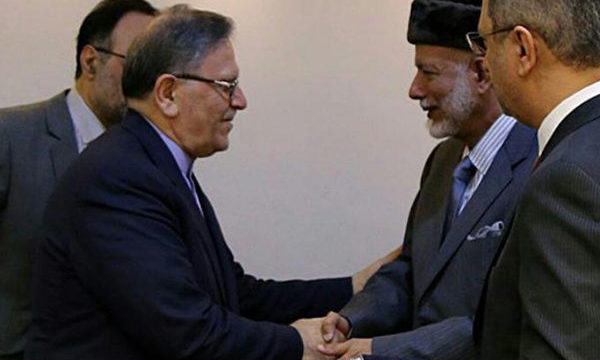 MNA – Omani Foreign Minister Yusuf bin Alawi reassured the Central Bank of Iran (CBI) Governor Valiollah Seif that banking ties between Iran and Oman will grow as the officials of the two countries are determined to do so.

“Undoubtedly, this meeting is a favorable opportunity to establish banking relations between the two countries and we are making efforts to put banking and economic relations under the spotlight more than ever,” said Omani Foreign Minister Yusuf bin Alawi bin Abdullah on Saturday.

The Omani top diplomat who is visiting Tehran made the remarks during his meeting with the Governor of Central Bank of Iran Valiollah Seif at the headquarters of Iran’s central bank.

“Banking relations between Iran and Oman are growing thanks to the will and determination of the high-ranking officials of the two countries and we hope that beside growing diplomatic ties, our economic and banking relations grow as we are neighboring countries,” asserted the Omani official.

“One of the other advantages is participation at oil, gas, and petrochemical products markets and cooperation between Iran and Oman, considering the closeness of the ports of the two countries is possible but needs banking relations,” affirmed Mr. bin Alawi, pointing to the grounds of cooperation and joint investment.

“Accordingly, the development of banking relations should be highlighted as a base,” underlined Mr. bin Alawi.

“Drafting an operational and practical program with opening joint accounts based on the national currencies of Iran and Oman, independent from foreign currencies, should be considered as one of the requirements of developing banking relations,” added the Omani diplomat.

The Governor of Central Bank of Iran Valiollah Seif, in this meeting, for his part, welcomed the presence of Omani banks in Iran to have switch services between the banking cards of the two countries.

“Besides having strong political and economic relations with Iran, Oman can act as a base for re-exporting Iranian goods and as a hub for international banking transactions of Iran,” reiterated the Iranian official.